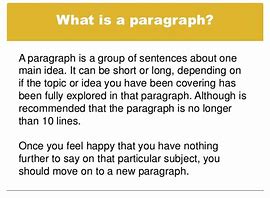 Because the art of writing is different from the art of speaking, there are advantages and disadvantage which both share with each other.

There are three thought-provoking differences which have some very practical implications for the public speaker.  Because you can “do some things” in the art of writing which you cannot do in the art of speaking, the speaker has to account for and/or overcome them a different way.

For instance, if one were reading a page from a technical* or very non-technical book, one would be visually be informed by the evident scheme which characterizes writing.

Visually, there is a distinct paragraph scheme.  “Paragraphs” are separated by “white space,” followed by an indented first line.  “Paragraphs” inform the reader of at least two things . . . .

#1) a change of thought or direction — whether it be the moving to another distinct thought, an expansion of what has been said, or clarification of the something specifically mentioned but a few words ago.

#2) the embodiment of the paragraph’s primary idea within the first sentence — Typically, paragraphs begin with a sentence which captures the general idea of that paragraph, followed and supported by the following sentences.

As a speaker moves through his/her content, he/she has no capability to visually indicate either one of these two “thought indicators.”  He cannot create any “white space” or “content separation,” “first line indent,” or “summary sentence notification” so that the listeners understand what a reader would have understood.

How does a speaker accomplish what a writer does all the time?  How can a speaker create “white space,” or tell the audience that a “new paragraph/thought/section” is now beginning, or that this next sentence is to be understood as a general summary of what is to follow?

A speaker’s words can be put into written form, but not without grammatical changes and corrections, as well as some fundamental visual changes.  This is why the public speaker must seriously consider the need to and method of providing vocal indicators which tell the audience the same information which a reader is told visually.

These vocal indicators fall into at least four categories . . . .

conjunctive words – “NOW that we have seen / understand / realize that . . .”

directional statements and phrases – “That is the situation which David found himself in.  How did David view that years later?  What would David think about this whole event when he had time to reflect on it?  Let’s look at the song David wrote about this event – looking back – turn to Psalm . . . “

vocal tone – Sorry, I can’t give an example of this since the art of writing does not communicate tone.  In writing, the tone has to be described by a word description [i.e., He shot back in a sarcastic voice to his father and said . . . ] There are some ways to communicate tone by typing the letters in such a way as to exemplify vocal tone, but the methods are communicatively subjective —  italics, bold print, and CAPITALS.  However, the voice has an amazing capability to communicate a change of direction by a change in tone — by the use of volume, pitch, intensity, and pause.

*My reference to “a technical book” is purposeful in that the more “technical” or academic the material, the greater the advantage of working with the written, rather than the spoken.