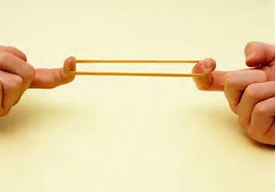 With this rhetorical approach, you connect two passages together for the purpose of posing a serious and answerable question.  One can create a tension by looking at two biblical concepts, passages, events, or truths.  When they are put together and thereby flesh out the tension, the speaker can then establish a principle, a Big Idea, that comes out of the combination.

Here are the two passages, two Christmas passages.  The two passage paint in the details of the Christmas story.  Both of these passages are included in the Scriptures and each one adds information the other one does not provide.  That is what will give us the ability to see the tension between the two passages.

If you draw a contrast between these two accounts you will notice that Mary was told by an angel that she would be the mother of the Messiah even though she knew not a man.

Then, either Mary told Joseph that she was pregnant or it became obvious to him and/or others and he learned that way.

In either case, Joseph later learned that Mary was pregnant and was THEN faced with a decision concerning his future with her.

He was clearly considering to put her away – privately.  That means that he either did not believe what Mary had said to him ( if she had shared her account with him) or that he (and/or others) had concluded that her pregnancy was due to another man.  Therefore, he was going to “get a writ of divorcement.”

However, something THEN intervened — The appearance of an angel to Joseph.

The angel appeared WHILE Joseph was wrestling with his decision as to what he would do, believing up to this point that Mary had been unfaithful.

Those are the realities when you put these two pieces of the puzzle together.

When you put those pieces of the puzzle together, it leads to this question and principle.

Question:  Why did God do it this way?

[There could be a whole series of messages on “The Ways of God” — How and/or Why God does what He does, the WAY He does.]

Therefore, there must be a purpose in allowing Joseph to struggle with what he now knows.

There must be a reason that God would put Joseph through these “days” of doubt (and also put Mary through it as well, knowing that Joseph does not believe her . . . . either).

And there is a purpose . . . .  A purpose which is peppered across the pages of Scripture.

The Lord is willing to have His people wrestle through issues, that He could well have resolved far faster, sooner, or easier.

The Lord, in Who His very being, has no difficulty in letting His people struggle through hard days . . . .

√  the Lord is more interested in the PROCESS than He is in RESOLUTION.

√  the Lord is more focused on what can be accomplished by the struggle, than resolving the struggle.

√  the Lord wants us to work our way through a problem, and not just give the victory.

We can go through the Scriptures and see that the Lord works that way, over and over!  Whether it be . . . .

Abraham – father of a great nation

Judges 1:19 — Lord was with them, but they could not because the process is more important than the victory

The Apostle Paul – Let’s have him saved during your earthly ministry and save a few lives!

David – Let’s just put him on the throne or right after Saul is killed at least!

And when she saw him, she was troubled at his saying, and cast in her mind what manner of salutation this should be.
And the angel said unto her, Fear not, Mary: for thou hast found favour with God.
And, behold, thou shalt conceive in thy womb, and bring forth a son, and shalt call his name JESUS.
He shall be great, and shall be called the Son of the Highest: and the Lord God shall give unto him the throne of his father David:
And he shall reign over the house of Jacob for ever; and of his kingdom there shall be no end.
Then said Mary unto the angel, How shall this be, seeing I know not a man?
And the angel answered and said unto her, The Holy Ghost shall come upon thee, and the power of the Highest shall overshadow thee: therefore also that holy thing which shall be born of thee shall be called the Son of God.

Now the birth of Jesus Christ was on this wise: When as his mother Mary was espoused to Joseph, before they came together, she was found with child of the Holy Ghost.
Then Joseph her husband, being a just man, and not willing to make her a publick example, was minded to put her away privily.
But while he thought on these things, behold, the angel of the Lord appeared unto him in a dream, saying, Joseph, thou son of David, fear not to take unto thee Mary thy wife: for that which is conceived in her is of the Holy Ghost.