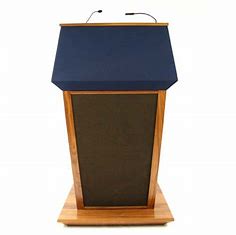 Six Ways To Blow Up Your Pulpit

What are the first thoughts which come to your mind when you hear the names of such people as  . . . .

One person they all have or had in common was Jesus.  They were all professed believers in the Gospel.

Each of the various personages carries an “ethos” — a platform

“Ethos” is a classical rhetorical word which speaks of the audience’s impressions, feeling, opinions, emotions, regard of you as a speaker.

We are relying on the Holy Spirit, to take the Word which He has authored, and speak to the hearts of men, which is His ministry.  We just lay out the truth of God’s Word to the minds and hearts of God’s people!

Surely, that cannot lead any honest person to take the position that one does not speak from “a platform” — can it?

In the Lord’s program, The Platform is so important that there are numerous and various qualifications which are laid out for being a pastor.1  Most are about the need of a platform.  While O\one of the qualifications is “apt to speak.”  That qualification may be met by many, but not all meet the remaining qualifications which give them a right to be heard or regarded by those listening.

Over the years I have seen pastors show little awareness of how they are blowing up their platform, and then they are confused, no less shocked, that those who are listening are not moved or impacted by their words and the front door is revolving!2

There are at least six reasons that a speaker’s platform is slowly being eaten away and the congregation is unmoved by what is being said.

IT ALL SPEAKS — non-verbally.

If you think the audience is not hearing it, you would be mistaken — sorely and regretfully mistaken!

If you don’t hear what you are saying, you might have a “tin ear” and also confused as to why people come and go, why you are not growing, and why people are not following your lead.  It is because you are speaking a message non-verbally!

I understand the pushback here as well!

“Someone can always misread what we do!  We can’t always walk around looking for where someone can misunderstand out actions!”

That comment is a strawman and is disingenuous as well! — I can’t always — but I can try to ensure that someone does not misread what I am doing because I am not thinking about others!

#2) Disingenuous – not genuine!  As is often said in America, the people are not as “dumb” as you think.  They read “fake” fairly easy and if they miss it initially, over time they are able to separate the real from the fake.

People do not give credibility to those who are guileful or duplicitous.  If you as a speaker or preacher are seen as finagling rather than forthright, if you are underhanded rather than above board, you will lose the respect and therefore the attention and interest or those who are dutifully seated before you!

I have seen it happen (and been guilty of it myself).  Rather than just dealing with an issue straight on — myself –I sought to take a roundabout route to resolve it.  When that happens, you lose credibility and respect.

Don’t send someone else to do what you need to do, especially when the person you send does not agree with you about the issue, but is operating as “an unpersuaded shill” himself.”  Because, when a pastoral or deacon “decoy” is potentially asked, “Is this you speaking or “the pastor,” the decoy may answer that he really has no issue with it — you will righteously “anger” that person.

I have learned to say — “Shoot your own bullets, mine don’t fit your gun.” Don’t use my thought, words, or opinions as bullets in your gun. Do your own thinking and get your own ammunition if you want to say something.”

Have you ever said, “Why didn’t they come to me and ask me?”

Operate above board when it comes to confrontation, correction, problems, and/or differences!  And when you are not, do not think that because God’s people ought to have right attitudes, that you cannot provoke negative emotions and attitudes by verbal and non-verbal messages.

In fact, we as fathers are even admonished to not provoke our children to wrath, and the biblical issue/answer is not that our children are to have the right attitudes towards authority and their parents! Their attitude has been provoked.

It is disingenuous to play these kinds of games (and others), and listeners will lose respect for you.

There are other games pastors and preachers can play and think that the congregation doesn’t get it.

The people “get it” and see through it, no matter how gracious they try to be and no matter how desirous they are to think the best in their response.

#3) Dishonesty — Make a bold statement, which is not true, or worse yet, lie to someone, and it is all over for that person.  There is probably little to no interest and/or attention given them in whatever point(s) they may seek to make!

I remember being asked a question, and I hesitated giving an answer but knew I just needed to tell the truth when asked.  I hesitated because it was embarrassing, not criminal, sinful, immoral, unseemly — just embarrassing that I would have picked up some soda at a liquor store.

I said, “Yes I did.”  The response was, “I know you did because I saw you going into the store and knew it wasn’t about liquor but thought it unwise.” — and it was!

I was so glad that I said yes when asked.

Issues of honesty are more often less black and white. If you make statements “from the pulpit” which are known to be nuanced, but not entirely accurate representation of the facts, do not be shocked that people do not follow and/or give weight to your words.

Someone asked another leader what advice he would give to a new pastor beginning their ministry. Their answer surprised me! — “It is one word, loyalty.” —

Really! —- that is the password of those who know how to surround the wagons. My thought was the word . . . integrity or honesty. Be honest, show integrity and loyalty will flow as a by-product.

#4) Power Plays — Politics do come into the local church – unfortunately!  Some pastors are going to get their way and willfully avoid any and all pushing against their stubborn direction.  No matter how unable or unwilling to defend a decision or direction, the pastor has made the decision and that is it!

Surely, this approach doesn’t affect the credibility of a speaker! — (tongue in cheek).

#5) Unresponsiveness To Biblical Truth — While the preacher expects the people to listen to the preaching of the Word, when it comes to making a Scriptural argument which now touches a pastor’s thinking or behavior, what the Bible teaches is for all practical purposes, too easily dismissed.

Sometimes, you just need to “touch” a pastor’s idol, and it sets off a series of responses which engenders the respect of no one!  What has just happened is recognized for what it is — I guess I touched someone’s god — and what has happened is not a pretty picture — “That idol must be pretty important if it engenders such a response, not to mention its various actual and potential implications!”

We ask God’s people to be teachable.  How about those who do the teaching? Do we show ourselves open to those who disagree, but still love the Lord!

#6) Dogmatism —   How many times have I been approached by a fellow believer who came up after the service and asked a question or made a statement which balanced out what was being said!  A preacher’s response to those situations, or a willingness to engage in an alternate viewpoint will impact “ethos.”

All these play into your platform, into how people will or will not listen, focus, and regard what you are saying!

There can be a refusal to allow others to propound ideas which are diverse from the company line.

“If you listen and find yourself disagreeing over this or that, I’m okay with that.  You don’t have to buy into everything for us to be going the same direction in the work of the kingdom.  If you leave here and say, I am not sure I agree with pastor on that understanding OR application — we don’t need to take that as being critical, but as being biblical!”  And then in order to add a little lightness I often say, “When we get to heaven you will find yourself agreeing.”

We don’t need to take it personally when someone in another adult class or youth session disagrees with us.   In fact, I have said, “Pastor so-in-so takes a different position on this and it is an arguable position.”  That is, there are some arguments, some good arguments, which are made to support this-or-that position!

We as pastors and leaders ARE NOT right about everything!

Anyone who knows me understands that I feel strongly about the positions which I hold and teach as God’s truth.  I am not intimidated by those who hold a different position.  I  am willing to hammer out the reasons for the position I hold, while also understanding some of the good arguments which support alternate interpretations and applications of Scripture.

“The dangerous” are not the “Bereans,” but those who do not want to engage with those who disagree, but just try to shut down other voices with no reasoning or argument, but by the power of position, by threatening church discipline, by leveraging relationships, by stirring up sympathy, by . . . by . . . .

Are you making it hard to listen because you are blowing up your platform?

That is the seventh cause!

A bishop then must be blameless, the husband of one wife, temperate, sober-minded, of good behavior, hospitable, able to teach;
not given to wine, not violent, not greedy for money, but gentle, not quarrelsome, not covetous;
one who rules his own house well, having his children in submission with all reverence (for if a man does not know how to rule his own house, how will he take care of the church of God?);
not a novice, lest being puffed up with pride he fall into the same condemnation as the devil.
Moreover, he must have a good testimony among those who are outside, lest he fall into reproach and the snare of the devil.

** I have also seen little to few people reached for the Lord with this same “platform-less” mentality. Talking to others about their need of Jesus also relies on “having a platform.”  If people have little to no regard for you as a person, they have little interest in listening to what you have to say about Jesus.

2. I have also seen little to few people actually reached for the Lord with this same “platform-less” mentality.

Talking to others about their need for Jesus also relies on “having a platform.”  If people have little to no regard for you as a person, they have little interest in listening to what you have to say about Jesus.

We are relying on the Holy Spirit, to take the Word which He has authored, and speak to the hearts of men, which is His ministry.

Surely, that cannot lead any honest person to take the position that the platform from which one speaks has little relationship to the responsibility the Lord has given His people and/or its impact on the listener.  Whether it be the Word of God, the prayers of God’s people, and our lives, all are parts of what God has said He uses to speak to the hearts of men.