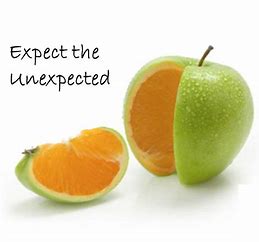 “Darkness enveloped the whole American armada. Not a pinpoint of light showed from those hundreds of ships as they surged on through the night toward their destiny, carrying across the ageless and indifferent sea tens of thousands of young men, fighting for … for, well, at least each other.”

“fighting for … for, well, at least each other”

. . . . is a great example of a rhetorical technique which we can label, “Calling Up The Unexpected.”

Likely, you, as well as the audience, were thinking — “tens of thousands of young men, fighting for … their fellow Americans” or “freedom” or “their country.”

However, not only did Pyle say, “each other,” but cued it up with — ” for, well,” followed by “at least.”  The phrase as a whole calls up a thought which you and the audience may not have anticipated.

However, the wording also calls up thoughts which go beyond the actual words!  If the soldiers were there for no other reason, if they were motivated by no other cause, they were there to fight for the lives of each other.

There are actually two rhetorical principles which are exemplified in these opening words of this memorial day speech.

#1) The use of the unexpected.  The speaker rhetorical turns a different direction from what the audience’s mind is saying as it anticipates the sentence.

It is very common for the audience to anticipate what is going to be said, or how the sentence will finish.

“tens of thousands of young men, fighting for each other.”

But it would have lacked the tension that his actual statement evoked.

The rhetorical power is found in the pause and repetition which causes the audience to “participate” in the thought!  Instead of being in a “mental cruise control,” thinking we know how the sentence will finish, we move from observes to participants in the thought.

“Anticipation” or “tension” is part of the emotional make-up of a speech and cause the listener to enlist on this rhetorical journey.

#2) The ability to excite thoughts which have been heretofore unthought.

That is part of the aim of speaking or preaching.  The minds of the audience are being excited by thoughts they have . . . .

not thought about for a meaningful period of time

not put together with other thoughts

connected with yet in a different way

Have you ever said as a listener, “That is an insightful comment!”   Has an audience member commented, “I never thought of that, that way, before!”  Those comments reflect that there was something communicated which was “insightful.”

A statement causes a sort of “rhetorical mental revelation.”  We, or the audience, were not thinking down those avenues, but now we are!  We now think of what was happening that day when men stormed the beaches a little differently —  “If they were moved and motivated by nothing else, they were driven by altruism, commitment, and dedication for each other!”

Write out the originally intended statement which finishes in a way that you and/or the audience would have thought.

Add such words as “well,” pause, and repeated the “que” words.

Finish the thought in a way that calls up a slightly different angle that one anticipated.

Paul was on the road to Damascus to kill the followers of … well, followers of … at least of a dogma which was opposed to who he himself was as a Pharisee.

Jesus drive out the money changers because they had made God’s house … well … at least a house which now shouted by its very activities — the necessity for His coming into this world over 30 years ago.