June 23, 1902, the first “Mercedes” was registered in Germany by Daimler.  The company was named “Daimler” because the engineer was Gotlieb Daimler who was one of the early pioneers of the internal-combustion engine.

The first automotive internal combustion engines (the so-called Otto engines – four-cycle engines) were developed in the later years of the 19th century (successfully on May 9, 1876 — after 14 years of research, experimentation, and hard work) in Germany.

Originally, Daimler was an apprentice gunsmith who was given a set of engraved double-barreled pistols upon completion in 1852.

That same year Karl Benz designed and patented (“Benz Patent Motorwagen”) a one cylinder-two-cycle engine for use in an automobile.

in 1891, the Daimler Motor Company was in partnership with the American and German piano company — Steinway & Sons which was already established in 1853 in Manhattan, NY, by Heinrich Engelhard Steinweg (later known by his American name – Henry E. Steinway).

In 1885 Benz patented his “car” —  “Benz Patent Motorwagen.”
In 1896 a patent battle began between Daimler & Benz.
In 1897, a French diplomat, Emil Jellinek (who because of his personal interest in and purchase of Daimler’s cars later became known as Emil “Jellinek-Mercedes”) ordered a car from Dailmer which was powered by a six-horsepower, two-cylinder engine.
In 1897 Jellinek began selling cars and sold 140 of them that year and began naming them “Mercedes.”
In 1899 DMG began developing a car for racing, as a means of publicity in Europe.
On March 20, 1900, that car crashed, killing the driver and DMG pulled out of the car racing business.

On March of 1900, Gottlieb Daimler died in Germany.

In April of 1900, Jellinek ordered 6 cars and set down the specifications of the cars:

In 1901 Jellinek entered the Nice, France races and won.  The car was able to reach speeds of 53 mph.  This was a milestone in the success of the “Mercedes.”

In 1903 Jellinek changed his name to “Jellinek Mercedes.”

The car created by Gottlieb Daimler was named “Mercedes” after the first daughter of Emil Jellinek.  Jellinek also named his mansion the Villa Mercedes.

In 1909 the Mercedes symbol, a three-point star, became the registered trademark of Mercedes.  The three-point star is said to have been the symbol drawn on a postcard by Gottlieb Daimler, marked the house where he was living, believing that wealth and prosperity would shine on them one day and that he would one day own his own factory.*

In 1926 the Daimler and Benz companies merged.

Where you start in life may not be at all where you end — guns to gasoline.

Men stand on the shoulders of others who came before and/or alongside them.

A race which catapulted a car into fame.

A famous name and brand were connected to another – (Mercedes).

“Daimler” – Who thought that then that it would still be around today!

It was the interest of another which drove it to success, fame, and fortune.

Specifications:  He knew what it would take to win.

A star which did shine one day, but not on him.

A name which came from another family (Jellinek’s first daughter).

A one cylinder two-cycle engine changes the world of fine cars.

Some pioneers may never get to see the full success of their dreams and work.

From the exposition of a gun, to the explosions of an engine — both have changed the world for decades.

It was an interesting mix — Pianos & Cars — and both still known around the world today.

“In 1896 Emil Jellinek traveled from Nice to Cannstatt, where he was met by a gleaming 6hp Daimler and driven to the newly opened Daimler Motor Works. He purchased one of these vehicles and in the following year he ordered no less than 140 of various models. In next to no time he was the sole agent for Daimler outside Germany; in fact it was he who gave the name of his daughter to all the cars which he bought for re-sale from the Daimler Company thus establishing for all time the world-renowned car which carries the three pointed star. Later he was to add the name to his own and became known as Emil Jellinek-Mercedes.” 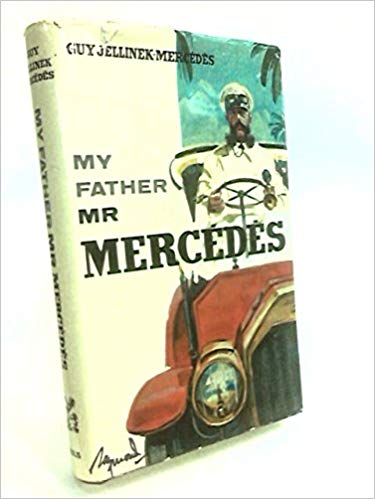