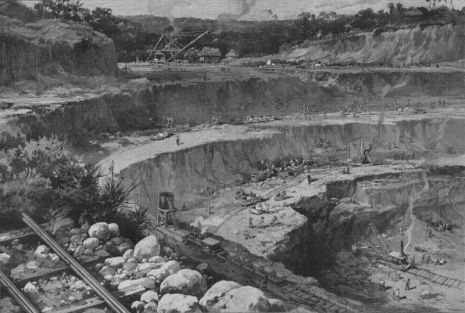 What makes this so historic is not that a vote was taken to build the Panama Canal, but that the vote was taken to finally decide whether the isthmus canal would be in a province of Columbia  – called Panama- or Nicaragua.

From the beginning, there was little to no doubt that the United States would build the isthmus canal through Nicaragua — not “Panama!”  After the failure and global embarrassment of the French government and the horrific financial disasters which impacted its investors — of at least 120,000,000 loss — there was almost no talk of continuing the project France had begun !

In fact, even after the subject of the Panama route had been successfully raised in the House of Representatives  —  because of the activities of the Frenchman — “Philippe Bunau-Varilla” — the failed French Panamaian route had not even come close to being a serious consideration.   On January 6, 1902 — the House passed the “Hepburn Bill” by a vote of 308 to 2 to proceed with the Nicaragua canal.

Senator John Tyler Morgan was the key individual who promoted the Nicaraguan location — Chairman of the Senate Committee on Interoceanic Canals  — referred to as “The Morgan Committee.”

“The canal was the dream of his life and he was as certain as he could possibly be that it must be a Nicaragua canal.  Nicaragua, in the popular phrase, remained ‘the American route.’ . . . The canal would be his monument . . . . He wanted no monuments, he wanted the Nicaragua canal.  Morgan wanted an American canal under American control no less than did Roosevelt.  Nor had he ever been the slightest bit tentative about that. . . .

Nicaragua offered the lowest pass anywhere on the Cordilleras from Alaska to Tierra del Fuego;  Nicaragua provided fifty-odd miles of magnificent lake, perhaps as much as sixty miles of navigable river, the lake offered a limitless supply of water at the summit level of the canal.  Politically, Nicaragua was a stable country in which to make so vast an investment. . . . . A Nicaragua canal had already been the subject of six treaties between Nicaragua, Costa Rica, and the United States.  Nicaragua was clean, fertile, relatively free of disease; it had great potential for development. . . .Morgan had called the Panama plan ‘a job which has disgusted France . . . gangrene with corruption . . . the company’s assets and franchises were held to be virtually worthless, its stockholders litter better than common thieves.  Its officers were paid schemers and to be trusted under no conditions . . . . And since this was closely in tune with the opinion of the vast majority of American, his position seemed impregnable.” — pg 261-262

So how did American end up building the canal in “Panama”? — “by the start of 1902, not a single politician of importance had ever declared himself in favor of a Panama canal.  The idea had no constituents, whereas the enthusiasm for Nicaragua, within Congress and without, appeared to be overwhelming.” – pg. 270

Enter Philippe Bunau-Varilla — a Frenchman — an engineer — an authority on Panama — author “Panama: Past, Present, and Future (completed earlier in 1892) — an inspiring visionary — who now begins to sell / lobby the Panama route to Congress in the summer of 1899.

“His English was excellent and spoken with marked precision . . . The engineer was the evangelist” – pg. 278

Bunau-Varilla was not only charming and endearing, but he was passionate and tireless in his endeavor to sell the Panamaian route.  There was no audience he would not address and/or seek out to personally persuade.  He was undauting in the monumental task facing him.  He stated . . . .

“Everybody, the world over, then supposed that the Nicaragua Canal — the old Americans solution of the problem – would be carried out.  I determined thenceforth to center my efforts towards the adoption of Panama by the United States.  The task seemed impossible of achievement.” — pg. 280

In 1900, after endless appearnces, trips, writings, brochures, maps, inspiring visions and pictures of what this would means for America — after estimating that within four years it could be completed — after all of his best attempts . . . . ?

. . . . the preliminary report and recommendation by the canal commission was  . . . . Nicaragua!

In fact — Nicaragua – was seemingly the selected site for building the isthmus canal to the very end!

“exactly what it would have been had it been taken before the (House) hearings began.  The odds against a Panama victory in the Senate appeared now to be about 100 to 1.” — pg. 315

HOWEVER —  it would be the issue of earthquakes and volcanoes, which Bunau-Varilla previously brought to the forefront that would change the course of history!

“Late April of 1902 “on the Caribbean island of Martinique, 1,500 miles from Nicaragua, an enormous, long dormant volcano, Mount Pele, began rumbling ominously and spewing up clouds of hot ask.  Then on the night of May 2, the mountain trembled . . . . The city of Pierre, the ‘little Paris,’ was showered with volcanic dust and the sea for miles was littered with dead bores . . . . at 7:52 on the morning of May 8, 1i02, the whole mountain exploded.  The city of St. Pierre was wiped out in approximately two minutes.  It was the most appalling disaster of all time.  Sailors on a cable ship anchored eight miles offshore felt the heat.  A man watching from a distant mountainside said it looked ‘as if Martinique was sliding into the sea.’  Nearly thirty thousand people had been killed. . . . . The sole survivor of St Pierre was a prisoner locked in a windowless underground hail cell who had no idea what had happened until he was discovered by rescue workers.” — pg. 316

“For Philippe Buna-Varilla the news was heaven-sent . . . . ‘If not the strongest of my argument against Nicaragua, at least the most easily comprehensible of them was thus made a hundred times more striking . . . ‘”

When the minister of Nicaragua was contacted about the eruption of Momotombo, he lied and said that there was no such eruption.  Even though it was a lie, the lie spread and there was confusion as to whether it did or did not.

June 5, 1902 — Senator Marcus Hann steps up to give his speech in favor of the Panama location.  “enormous maps and plans” were on display.  “It showed the location of every principal volcano, active or extinct, the active ones being marked in red, the extinct in black, with the results that an almost solid mad of red dots ran from the Mexican-Guatemalan border on the Pacific shore to about midway into Costa Rica.  Eight of the red dots were in Nicaragua. “

“In the Columbian province of Panama, there were none.

“Also, as many observers were quick to note, Pelee, on Martinique, was indicated as extinct.”  pg. 319

“If the United States were to build a Nicaragua canal, what then was to prevent some other power – by which he meant Germany – from finishing the French canal?  Our competitors then, he said, would have all the advantage.” – pg. 322

Senator Harris responded and re-rallied support for the Nicaragua route in his Senate speech!

Overnight, Bunau-Varilla then re-revived the volcano issue by sending out sheets of Nicaraguan stamps to all the senator before the final deciding vote.  He included this note . . . .

On the Nicaraguan stamp was a picture of the Momotombo “in magnificent eruption.”

June 14, 1902 — after 14 days of debate in the Senate, the Senate vote was 42 to 34 in favor of Panama!  Five votes would have changed the course of history and we would be talking about the Nicaraguan Canals, not the Panama Canal.

On June 28, 1902, the House passed the Spooner Act, which gave Roosevelt the permission to negotiate with Columbia the Panama Canal

“The Panama Canal Purchase Act (P.L. 57-183, 32 Stat. 481), enacted on June 28, 1902, provided for the construction of a canal connecting the Atlantic and Pacific Oceans. The act authorized (1) the purchase of the French New Panama Canal Company at a cost not exceeding $40 million; (2) negotiation with the Colombian government for “perpetual control” of a strip of land at least six miles wide on either side of the canal, as well as rights to operate the canal; and (3) the building and operation of the canal “for vessels of the largest tonnage and greatest draft” in use at the time of the act’s passage.”

President McKinley ordered a feasibility study for the “most practicable and feasible route” in 1899.

Approximately 4,500 – 5,600 died from  disease (a small number of these from accidents) under the American endeavor.

The United States would have faced the same casualty rate were it not for Dr. Gorgas’ insight on the cause and steps which needed to be taken.

Very little attention was paid to the problem of yellow fever and malaria during the debate of the canal routes and specifically to the problem that France faced in Panama.

“. . . . Hanna asked about the problem of disease.  ‘If the reports are correct . . . we can get rid of yellow fever by killing the mosquitos.’  Nobody picked him up on that, nobody seemed the least interested, and nothing more was said on the subject during the whole course of the hearings.”

One of the other reasons that Congressman Morgan wanted the Nicaraguan route was because it commercially benefited the southern states more than the Panama option.

For all practical purposes, no one had experienced or understood what it was like in Panama during the rainy season.

The Panama Railroad had been built and was running across the isthmus — 47.6 miles.  It was a response to the 1849 California gold rush and was running from about 1852 (twenty miles was laid).

• Never say never
• One man’s passion and drive changed history
• Drive and passion
• Never give up!
• Changing the course of history
• The impact of the visual – maps & stamp
• It only takes one event to change the discussion
• As God would have it
• He’s got the whole world in His hands
• The persuasion of a picture
• A Stamp: A powerful argument
• A smart move
• It ain’t over until the fat lady sings
• What a change of events!
• The cost of “progress”
• The ambitions of men
• The ingenuity of men
• The cost?  A lot of lives!
• What would be pictured on your postage stamp?
• A picture is worth a 1000 words
• A powerful argument can change minds and hearts
• An age when persuasion played a part in politics
• The power for words and pictures

“The Path Between The Seas” is the title of David McCullough’s book on the creation of the Panam Canal — 1870-1914.  It covers both the attempt by the French, followed by that of America.  Over 600 pages which delve into the newspaper, magazine, and congressional information on the planning and execution of the Panama Canal — along with many other sources of information!

“Then, as fate would have it, a volcano exploded on the island of St Martinique killing 30,000 people! Immediately the question of volcanoes in the Nicaraguan canal zone surfaced in Washington, but the Nicaraguans sternly denied the presence of any active volcanoes. Legend has it that Banua-Varilla was about to leave town empty-handed when at the last minute a colleague showed him a recent Nicaraguan postage stamp. Amazingly, in an episode of unbelievably bad timing for the Nicaraguans, the stamp displayed a picture of the Momotombo volcano spewing lava and smoke. Seizing the moment, on the eve of the vote in the US Senate, the French lobbyist reportedly scoured the various Washington DC area stamp sellers somehow acquiring enough copies to send one to each undecided senator. Accompanying the stamp was a note suggesting that the evidence proved that Nicaragua was no stranger to violent geological events and the Nicaraguans knew it. In an amazing Hail-Mary turn of events, even though the suspect volcano was 150km from the proposed canal, the stamp ploy was successful. The Senate voted for Panama– the Nicaraguan canal deal was dead. Just like that!” — https://parallelnarratives.com/the-panamanicaragua-canal-debate-of-1902/

The Panama/Nicaragua Canal Debate in 1902