In the world of advertising, they understand how to reach the minds and hearts of listeners.  If they didn’t they would have been bankrupt long ago!  They understand communication so well that companies are willing to spend millions of dollars on one 30 second advertisement!

In their commercial, a bright, smiling young lady is seated at the counter of a classic diner. A waitress quickly moves down the counter, towards her, and then says . . . .

Customer: I’d like one of those desserts and some coffee.

Waitress: Sure . . Decaf or Regular 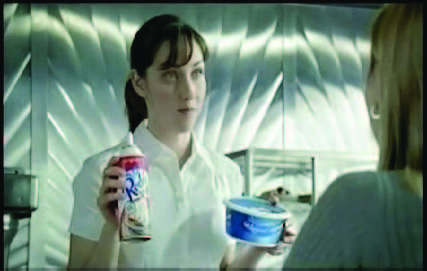 Now there is a puzzled look on the young ladies face . . .

The expression implies, “What do you mean oil or cream?”

The waitress responds to the puzzled face by reaching from behind and below the counter.  She retrieves two products and holds up . . .

— a colorful Reddi-Wip spray container in her right hand, and

The commercial then says . . .

“When other toppings are made with hydrogenated oil,

the real dairy cream is in ready whip – a sure an easy choice.

Nothing is more real than Reddi-wip.”

The waitress puts on a nice daub of Reddi-Wip

onto the Cherry Pie, turns around to put the can away. . .

As the customer dips her finger into the Reddi-Wip topping, and then licking it off of her finger . . .

(too late, she has already tasted it with her finger and

is licking the whipped cream off of her fingers)

Reddi-Wip is made with real dairy cream, not oil”  — is the principle they are communicating.

“Other toppings are made with hydrogenated oil” — is the truth or “the manufacturing principle” which accounts for the creation of other cream toppings.

Get that truth or that “industrial or production principle” into the buyer’s minds.

This advertisement is a GREAT example of effecting a change by changing the way one sees and/or thinks!  Do you see what they are hoping to accomplish?  It is an outstanding strategy, all designed to change the thinking and perceptions of the customer and ultimately us, the viewers.

The strategy is to have the watcher see and think differently about the product.  Reddi-Wip wants customers to look at a “cool-whip” type product as a manufactured fast whipped oil product, and to see Reddi-Wip as an actual milk/cream product.

The aim is to have the consumer’s vantage changed.  Next time the buyer picks up a container of “cool-whip” they may well now see it as a whipped oil product, and not real dairy cream.  The aim is to have the customer think, “You are just eating fast whipped hydrogenated oil when you eat that. I never knew that before!”

The customer may not have known that about the ingredients of such “cool-whip” products, but now — a new “truth” has been added to the mental mesh through which we process life.

Before, the buyer may not have known exactly what “cool-whip” was, but now when that information is added to their thinking and seeing, when that “truth” about the difference between these products is realized, they may well see and think differently.

It is when buyers understand the principle which accounts for or explains the manufacturing or production of “cool-whip” products, that it has the potential to change behavior, to change buying habits, to mentally change “taste thinking.”

After having presented this “Reddi-Wip” example to an audience years ago, just in the last few weeks, I had one of the members who was in that audience say to me . . . .

Yes!  That is what grasping a principle does — in this case it was a manufacturing or production principle.  Prior to this, the listeners did not know this “chemistry principle” — that you can fast whip oil along with other products, and produce a whipped cream looking product which looks like dairy whipped cream.  You can mix together . . . .

The goal of advertising is to have us see and think differently. New information, facts, visuals, examples, pictures, experts, statistics, explanations, and the like are all seeking to affect and/or change our minds as to how we see and think.

There are all kinds of Laws & Principles In The Natural World.  There are physical laws which are built into this world — into God’s world! God created a world which has design and part of that design involves natural laws. Those natural laws and principles operate in an amazing variety of fields of endeavor . . . .

The laws and principles can be known, understood and applied to achieve one’s aims. It is because those natural laws have been discovered and understood, that men are able to accomplish what they accomplish in so many different fields of study.

Preaching is about communicating those life principles.  That is illustrated by Dr. Charles Stanley — “Discover the memorable truths that have guided Dr. Stanley’s life for many years.”

#5 — God does not require us to understand His will, just obey it, even if it seems unreasonable.

#30 — An eager anticipation of the Lord’s return keeps us living productively.

That is where a message is headed — the examination of a passage of Scripture in such a way that the principles is . . . .

Here are some sample biblical principles (none are mine) which could easily be associated with a number of different Scriptural passages.

Whether they are used as one or more main points of a message or used as a singular Big Idea, they are “sticky stated principles” which an audience can take with them!

“Actions not only speak louder than words but they also echo into the next generation.”

“God gets more mileage out of adversity than anything.”

“Leaders are made one response at a time.”

“It’s better to make a difference than to make a point.”

* (Link) You Don’t Even Want to Know What Cool Whip Is Made Of!