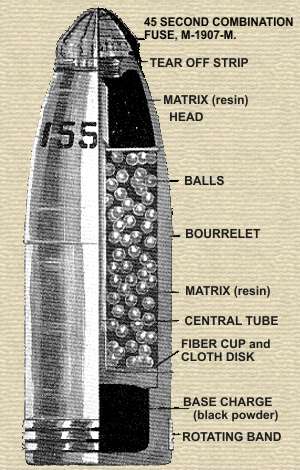 You Still Have To Deal With The Shrapnel

When we hear the word “shrapnel” we do not think of a person, but of an object.  However, Henry Shrapnel was the person from whom the term was derived.

Henry Shrapnel: “In 1784, while a lieutenant in the Royal Artillery, he perfected, with his own resources, an invention of what he called “spherical case” ammunition: a hollow cannonball filled with lead shot that burst in mid-air. He successfully demonstrated this in 1787 at Gibraltar.  He intended the device as an anti-personnel weapon. In 1803, the British Army adopted a similar but elongated explosive shell which immediately acquired the inventor’s name. It has lent the term shrapnel to fragmentation from artillery shells and fragmentation in general ever since, long after it was replaced by high explosive rounds. Until the end of World War I, the shells were still manufactured according to his original principles.”

Family: Henry was the ninth child of Zachariah and Lydia Shrapnel

“The projectile is packed with fragments – often sharp metal, lead balls or nails – and detonates in midair, spraying enemy troops in the vicinity with what the British quickly christened “shrapnel.”

Shrapnel married two existing weapons technologies, the canister shot and the delayed-action fuse. Canister shot, in use since the 1400s, burst upon leaving the gun’s muzzle and was originally used in small arms at close range against infantry. Shrapnel’s refinement carried the shell intact to the enemy’s lines, where it detonated above the heads of the troops with much more devastating effect.”

Used by the Duke of Wellington against Napoleon, and was used at the Battle of Waterloo.

“. . . the British called it their “secret weapon” during the Napoleonic Wars as the French struggled to replicate the invention.”

Henry Shrapnel was awarded him a lifetime annual stipend of about $128,000 —  in today’s money — for his invention

• slander
• selfishness
• forgiveness
• forgetfulness
• evangelism
• lovelessness
• be ye kind, tenderhearted
• arguments
• injuring others in word or deed
• fights
• “when the fight is over you still have to deal with the shrapnel”
• “When the fight is over we still have to deal with the pieces of the battle that remain inside.”
• marriage
• the mouth / tongue
• damaging relationships
• divorce – shrapnel when love leaves a home
• shrapnel flying all over
• anger
• a flack vest