“Things really kicked into gear on October 7, 1980 when Steven opened the doors to the first Steven Singer Jewelers in the heart of Philadelphia’s Jewelers Row.

At just 22 years old, Steven earned the distinction of being the youngest first-generation jeweler on Jeweler’s Row—the oldest (and second largest) jewelry district in the country.”

If you are driving in or out of the Philidelphia airport (PHL) — or driving around Philidelphia — you will quickly become familiar with the billboard which says . . . .

Steven Singer is a jeweler from Philadelphia who decided to come up with a clever advertising campaign which would cause people to say . . . .

“Who Is Steve Singer?”

“Why has someone taken the time to post such a billboard?

“That must cost a lot of money!”

“What did Steve Singer do to cause someone to spend the money to post such a billboard?”

Curiosity finally causes people to check out the website!

“After seeing the “I Hate Steven Singer” billboards all over town, literally since the day I moved here pulling into the city wondering “who is Steven Singer?”, I finally made it in here to check it out.”

I know that after a few times seeing the billboard, I went to the website to see what it was all about! —  IHateStevenSinger.com

Why all the hate for our man Steven? It all started more than twenty years ago when a guy proposed to his girlfriend with a gorgeous diamond engagement ring he bought from Steven Singer Jewelers. Naturally, she said yes. Twenty years later, he buys her another Steven Singer diamond ring to celebrate their 20th Anniversary. She was so excited, she gave her husband an even better present right back (wink, wink).

Exactly nine months later, the couple walks through the door to show Steven their new baby. The wife proclaimed “I love Steven Singer!” The man responded “Here we go again. We’re up all night with feedings and diaper changes. I HATE STEVEN SINGER!” So there you go. The story of why men hate Steven Singer. And why women love him and his beautiful diamonds!

“The phrase is also used in radio ads. The catchphrase featured on the billboard was uttered by a male customer of the jewelry store, who made the offhand remark after informing Mr. Singer that the diamond ring he bought his wife resulted in a new baby.

When the billboards first appeared, many thought they were the work of a vengeful woman.

There is even an “I hate Steven Singer” race car that competes in NASCAR Nationwide Series events.”

You can even listen to it yourself on sound cloud. 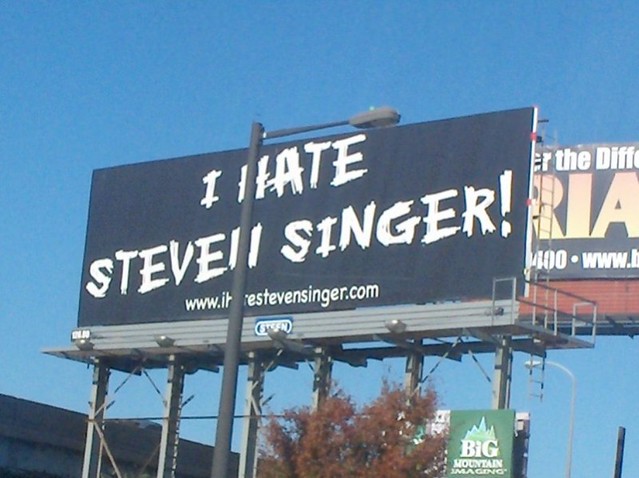 A Diamond In The Rough

Never content with being an average guy, he also completed courses in diamond residency, color stones, gem identification and cultured pearls at the Gemological Institute of America (GIA). Even then, Steven was your classic overachiever. Don’t you just hate guys like that?

Things really kicked into gear on October 7, 1980 when Steven opened the doors to the first Steven Singer Jewelers in the heart of Philadelphia’s Jewelers Row.

At just 22 years old, Steven earned the distinction of being the youngest first-generation jeweler on Jeweler’s Row—the oldest (and second largest) jewelry district in the country. And, with his store measuring a scant 8′ by 18′, he also had the distinction of owning the smallest store on the street.

Being small didn’t stop him. He had big ideas and an amusing way of selling exceptional diamonds. The store quickly gained a reputation as the place to go for “The most fun you’ll ever have…buying a diamond.”