something good without looking for it

“In 1840 to 1874 the J.B. Williams Company in Glastonbury, Connecticut, manufactured soap under the name Ivorine. Williams decided to focus on its shaving soap and sold Ivorine to Procter & Gamble, who later renamed it Ivory.

In 1874 Procter & Gamble trademarked “Ivory”, the name of its new soap product.

The name was created by Harley Procter, the founder’s son, who was inspired by Psalms 45:8 in the Bible: “All thy garments smell of myrrh, and aloes, and cassia, out of the ivory palaces whereby they have made thee glad.” — wikipedia

James Baker Williams was born in 1818 in Lebanon, Connecticut.

By the age of 20, James and his brother George owned the grocery/drugstore.

James had begun experimenting with different soap formulas and began selling one of his soaps called, “Williams Genuine Yankee Soap” in order to capture the European market of soaps used in the United States.  David, James’ son, created a produce a soap called “Ivorine.”

Proctor & Gamble:  “William Procter, an English immigrant, arrived in the United States in 1832 and settled in Cincinnati, Ohio with his wife Martha. He worked as a candle maker and after Martha fell ill and died, he threw himself even farther into his work, practicing and refining his trade. A few years later, he began dating Olivia Norris, through whom he met James Gamble, a soap maker who was dating Olivia’s sister. Once the two couples had married, Olivia’s father, Alexander Norris, encouraged the new brothers-in-law to form a partnership. The men began working together in 1837, and the Procter & Gamble Company was brought into existence. In the 1870s, William’s son, Harley Procter, became a senior partner at P&G.” — bbcleaning

“Ivorine” was purchased by Harley Proctor & James Gamble, and the name was later changed to “Ivory.” by the “Proctor & Gamble Corporation.”

“One morning in 1878, thirty-two-year old Harley Procter decided that the soap and candle company founded by his father should produce a new, creamy white, delicately scented soap, one to compete with the finest imported castile soaps of the day.  Procter’s cousin James Gamble, a chemist, soon produced the desired product.  Named simply White Soap. . . . (It) was not yet christened Ivory, nor did it then float.

Soap production began and the product sold well.  One day, a factory worker overseeing soap vats broke for lunch, forgetting to switch off the master mixing machine.  On returning, he realized that too much air had been whipped into the soapy solution.  Reluctant to discard the batch, he poured it into hardening and cutting frames, and bars of history’s first air-laden, floating soap were delivered to regional stores. . . . The factory was swamped with letters requesting more . . . . Harley Procter and James Gamble ordered that all White Soap from then on be given an extra-long whipping.” — “Panati’s Extraordinary Origins of Everyday Things” —  pg. 218

“Ivory” became popular because people were always searching for where the soap was in the bathtub.

“It was also Procter who noticed the words “out of ivory palaces” in his Bible as he attended church, and in 1879 christened the new soap “Ivory,”

“Ivory” is the best selling soap in America because it dissolves faster than most any other soap and therefore sells more bars. — wackyuses

“Perhaps Ivory’s most famous feature — its ability to float — was the result of an accident! An employee failed to shut off the soap-making machine when he went to lunch. When he returned, he found the soap mixture puffed-up and frothy. After consulting with his supervisor, the decision was made to finish and ship the soap since the ingredients had not been changed in any way by the longer mixing time.”

“This famous slogan originated in the 1800’s when samples of Ivory were sent to college chemistry professors and independent laboratories for analysis. Comparison tests were made with castile soaps — the standard of excellence at that time. One chemist’s analysis was in table form with the ingredients listed by percentage. Harley Procter totaled the ingredients which did not fall into the category of pure soap — they equaled 56/100%. He subtracted from 100, and wrote the slogan “99-44/100% Pure®: It Floats.” This became a pledge of quality to Ivory consumers. This phrase is so identified with Ivory, it’s registered as a trademark with the United States Trademark office.” — snopes 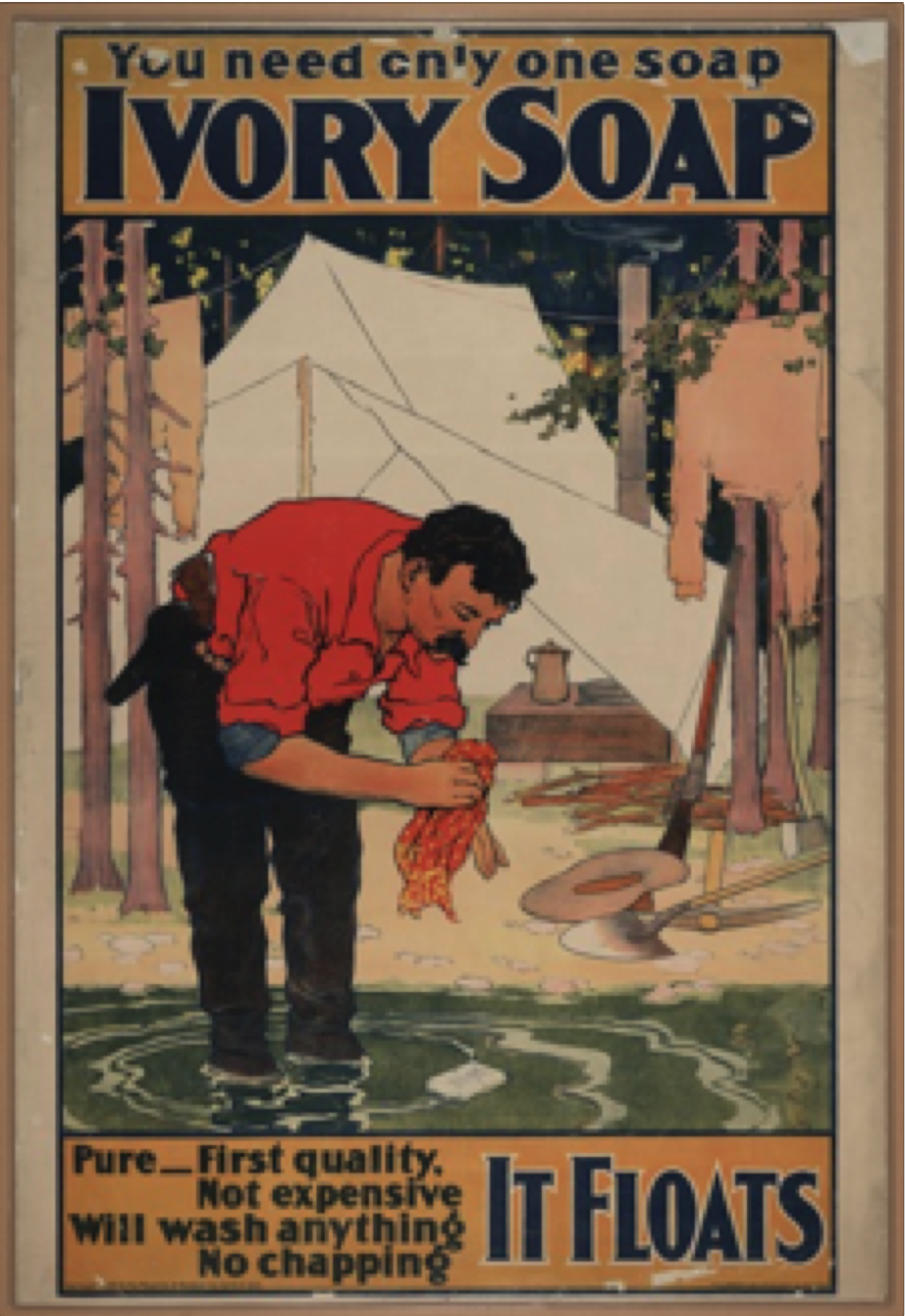 Example For Using This Illustration:

The background to “Ivory Soap”, the “soap which floats” is not known by most.  The interesting story behind this unique soap is that it was NOT originally designed to be a new kind of soap that floats.

That mistake in 1878 produced a product that has lasted to this day.  There are many events which come into our lives that seem like, from our initial vantage, mistakes, and disasters.  However, time and experience give us a vantage on some of those seeming mistakes and tragedies.  Those seeming disasters which are still never fully understood, and which are questioned as to their worth and place in our lives, will all be seen clearly in eternity.  What seems like a job loss turns into a greater work opportunity.  What looks like an accident causing new financial pressures becomes a financial benefit.  A lost relationship causing great pain becomes an occasion to go new and better directions.

The Bible teaches that “all things work together for good to those who love God” (Romans 8:28).  God is able to use the blunders and mistakes which litter our lives along with the many other events which He has planned and purposed to occur and which may equally seem like disasters and tragedies, and blend them all together for our good.  We cannot determine whether an event is good or bad until we wait to see what God is going to bring out of it all.  Have you found yourself delayed by taking the wrong road or by experiencing an automobile breakdown only to find out later that there was a terrible car accident down the road on which you were driving?  Have you ever said to yourself, “If wasn’t for the wrong turn or that flat tire I might have been in that accident?”  What you thought was a mistake or a hazard is now seen in a different light.  As it has been said, God is too wise to make a mistake and too loving to create unnecessary pain.

The final chapter in the story of Ivory Soap was that it was so well received that the company was deluged with orders for this new floating soap. The foreman was not fired but promoted.  Next time you purchase or use Ivory Soap, remember, it seemed like a blunder but it turned into a financial blessing.   Never forget, good does come from what we thought was bad.  God works with us and turns our blunders into blessing and promotions.

When you cannot see His hand, trust His heart.

“It Floats!” was another popular slogan for the Ivory brand, one which instantly distanced them from the competition. The first color advertisement for Ivory appeared in an 1896 issue of “Cosmopolitan”. In the 1920s, P&G launched a newspaper campaign that featured stories of a fictional family solving their problems with Ivory soap. To expand the appeal of Ivory to children as well as adults, P&G hosted a soap-carving contest in 1924, which is still a popular hobby today. After World War II, Ivory soap found yet another use: fake snow. By boiling and mixing the powdered soap, consumers could apply it to a tree and sprinkle the soap with glitter to finish the illusion of fresh snowfall. Ivory wasn’t pushed out of its tree-decorating role until the invention of aerosol fake snow in the 1960s.” — bbcleaning