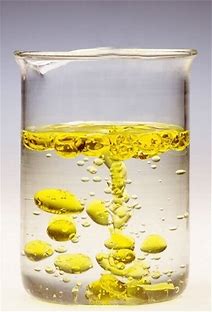 “It was in the year 1756 when the chef of Duke de Richelieu in France invented mayonnaise. Actually, it was one of those instantaneous and marvelous accidents of the past that helped in the invention of mayonnaise.

During the siege of Mahon (which is the capital of Minorca), there was a shortage of food supplies. That was why the chef thought of whipping eggs and oil together without adding any seasoning. This dressing was served to a dinner party hosted by Duke de Richelieu.

Mayonnaise got its name after a battle was won against the British people in Port Mahon. The word Mayonnaise was named after Mahon.”

This is no so much about the invention of mayonnaise, as it is about the role the “egg” plays in food preparation.

Mayonnaise is a combination of water and oil.  If you ever shook together a salad dressing that is composed of oil/vinegar and water, you will notice that it becomes cloudy.  However, the water/vinegar and oil will ultimately separate into their separate components again.

Mayonnaise is typically made from oil and “water-vinegar-lemon juice.”

However oil and water do not mix, they can be shaken together, but they will eventually separate.

Therefore, egg yolks are added because eggs cause the oil and water to stick together.

An egg yolk acts as an “emulsifier.”

“An emulsion is a mixture of two or more liquids that are normally immiscible (unmixable or unblendable).” — wikipedia

“An emulsifier or emulsifying agent is a compound or substance at acts as a stabilizer for emulsions preventing liquids that ordinarily don’t mix from separating. The word comes from the Latin word meaning “to milk”, in reference to milk as an emulsion of water and fat. Another word for an emulsifier is an emulgent.”  — thoughtco

Many recipes use eggs as a “binder” which helps the ingredients stick together and/or emulsify.

An egg is generally not added for flavor, but for its ability to hold things together.

• the body of Christ
• togetherness
• fellowship
• the cross
• Christ is an emulsifier — causes us to stick together
• the Church: Jew & Gentile
• friendships — David & Jonathan
• what binds us together
• certain biblical truths which bind us — bring us together
• denomination
• associations
• family
• heritage
• of one blood
• in Christ
• been emulsified with other who are different
• marriage
• children – siblings
• Christmas day

“Lecithin is another important emulsifier found in egg yolk. Known as a phospholipid, it’s a fatlike molecule with a water-loving “head” and a long, water-fearing “tail.” The tail gets buried in the fat droplets, and its head sticks out of the droplet surface into the surrounding water. This establishes a barrier that prevents the surface of the fat droplet from coming into contact with the surface of another fat droplet.” — science of an egg

“Emulsifiers are used to make noncompatible components of food, such as oil and water, blend smoothly rather than remain separate. They also help to keep food fresh longer. Emulsifiers are used in baking, candy-making, salad dressings, frozen desserts and coffee whitener, among other products.” — function of an emulsifier