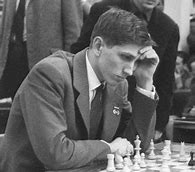 In The Image of God: Genius

On This Day: July 11, 1972 — “The Match of the Century” begins!– Bobby Fischer faces Boris Spassky in  Reykjavik, Iceland for the title of world champion.  If Bobby Fischer wins, this will be the first time an American was the chess champion of the world.

When Bobby was six years old, his sister bought him a chess set.

“Together they learned the moves from the instructions. . . . . Regina (his mother) feared he was spending too much time alone.  She sent an advertisement to the local paper, the Brooklyn Eagesl, appealing for chess playmates for her son . . . . (but instead of publishing the ad) They forwarded it to veteran chess journalist and official Hermann Helms.  He wrote to Regina in January 1951, suggesting she bring Bobby along to the Brooklyn Chess Club.” — fischergoestowar – pg. 5-6

This 1972 chess match was during the “Cold War” between the United States & The Soviet Union, and the match had political overtones.

“Far from being a simple ideological confrontation, the championship was played on many levels, of which chess itself was only one.  Reykjavik was the setting of a collision of personalities, of more and legal obligations, of social and political beliefs.” — Fischergoestoware — pg3

The U.S.S.R has held the title of world champion since 1969, without interruption.

This is the first time an American was the chess champion of the world.

This match has been immortalized in books, magazine articles, song, stage, poetry, and film.

May 1957 — youngest chess master in the United States

August 1957 — the youngest ever US Open Champion

At the age of 14, the second highest rated player in the United States

“Bobby wanted to go to Moscow. At his pleading, “Regina wrote directly to the Soviet leader, Nikita Khrushchev, requesting an invitation for Bobby to participate in the World Youth and Student Festival. The reply—affirmative—came too late for him to go.”[98] Regina did not have the money to pay the airfare, but in the following year Fischer was invited onto the game show I’ve Got a Secret, where, thanks to Regina’s efforts, the producers of the show arranged two round-trip tickets to Russia.” — young champion wikipedia

“I have discussed Fischer’s play with Max Euwe and Gideon Stahlberg. All of us, experienced ‘tournament old-timers’, were surprised by Fischer’s endgame expertise. When a young player is good at attacking or at combinations, this is understandable, but a faultless endgame technique at the age of 19 is something rare. I can recall only one other player who at that age was equally skillful at endgames – Vasily Smyslov.” — wikipedia

“The 1975 World Chess Championship was not played due to a dispute over the match format. Champion Bobby Fischer (United States) was to play Anatoly Karpov (Soviet Union) in Manila, commencing June 1, 1975. Fischer refused to play the then-standard “Best of 24 games” match, and after FIDE were unable to work out a compromise, forfeited his title instead.  Karpov was named World Champion by default on April 3, 1975.” –worldchess1975

“My 60 Most Memorable Games,” by Bobby Fischer — It includes nine draws & three losses, and does not include the 1972 world championship.

Bobby Fischer became what could be described as a recluse.

After that match, Fischer lived in exile to avoid a possible arrest by the American government for violating sanctions by participating in that match.

• genius
• the human mind
• gifted
• human potential
• happiness – not
• the human condition
• living lost
• attainment
• “success”
• “gain the whole world”
• a sad ending
• not how we begin, how we end
• the “dash” in between
• popularity, position, wealth, recognition
• not winning is memorable — my 60 most memorable games
• in the image of God

“In the summer of 1972, with a presidential crisis stirring in the United States and the cold war at a pivotal point, two men – the Soviet world chess champion Boris Spassky and his American challenger Bobby Fischer – met in the most notorious chess match of all time. Their showdown in Reykjavik, Iceland, held the world spellbound for two months with reports of psychological warfare, ultimatums, political intrigue, cliffhangers, and farce to rival a Marx Brothers film.” — cover of fischergoestowar

“He was the pride and sorrow of chess,” said Raymond Keene, a British grandmaster and chess correspondent for The Times of London. ”

“Noted French chess expert Olivier Tridon: “Bobby Fischer has died at age 64. Like the 64 squares of a chess board.”

“The tragedy is that he left this world too early, and his extravagant life and scandalous statements did not contribute to the popularity of chess,” Kasparov told The Associated Press.”

“Fischer’s reputation as a chess genius was eclipsed, in the eyes of many, by his volatility and often bizarre behavior.”

“Chess is war on a board,” he once said. “The object is to crush the other man’s mind.”

“Fischer had instructed Gardar that he wished to be buried in the small cemetery at Laugardalur church, outside the town of Selfoss, 60 km south of Reykjavik. It was a place Bobby visited a number of times with Gardar and his wife Krisín, whose parents live here. He said that the Laugardælur countryside would be perfect as his final resting place, should he die in Iceland. He did not wish anyone to be present at the funeral, except Miyoko Watai and the Sverrisson family, who would arrange the funeral. For this reason the burial took place in secret last Monday.” — finalweeks

“A BBC journalist once asked Fischer whether it bothered him that he had chosen to focus so single-mindedly on the game.  It was a problem, Fischer admitted, ‘because you’re kind of out of touch with real life being a chess player — not having to go to work and deal with people on that level.  I’ve thought of giving it up, off and on, but I always considered:  What else could I do?’  It was a reply that showed more insight that is normally credited to him” — fischer goes to war

“Arthur Bisguier, a grandmaster, remembers another key trait: fighting spirit. “The word ‘draw’ was not in Fischer’s vocabulary. He played every game like it was the last thing he was going to do on earth. When you played Fischer, you knew you were playing until you dropped off your feet. Chess to him was total war.” — sunsentinel

“Another interest of Fischer’s was the Worldwide Church of God, a fundamentalist organization that celebrates the Sabbath on Saturday and observes Old Testament dietary laws. Headquartered in Pasadena, the church is run by TV evangelist Herbert Armstrong, who predicted the second coming of the Messiah in 1975.

Fischer tithed $61,000 of his prize money. But when the Messiah failed to materialize, Fischer was upset. At the very least, he thought Armstrong should apologize for his false prophesy. When there were reports of high living among church officials, financial hanky-panky and adultery, Fischer quit.

In a taped interview with a magazine published by church dissidents, he charged that Armstrong and his followers had usurped his money and his mind. “They cleaned my pockets out. . . . You know, I was half out of my head — almost stoned.” — sun sentinel

“In Search of Bobby Fischer:  https://en.wikipedia.org/wiki/Joshua_Waitzkin