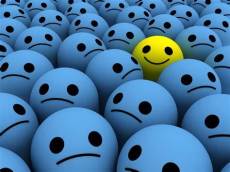 √  are similar but are not the same – the yellow ball among the many blue balls.
√  share a common component, but operate differently — for instance, motorcycles and bicycles ride on wheels.
√  resemble each other in outward appearance, but are really unique — for example twins are really two different personalities.

√  AND, at times there is a meaningful difference which is overlooked and/or not even seen.

Such is the case when it comes to a discussion on homiletics.  There are meaningful differences between the various areas of rhetorical practice 1 — law, politics, and religion. 2

“Preaching the Scriptures does not involve “human persuasion and argument,” but the Spirit of God working through the divinely inspired Scriptures, on the hearts and minds of men.”

“We don’t engage in “rhetoric” — which is rooted in gaining and persuading an audience to believe this-or-that secular truth.  That is what the “sophists” and professional speakers like Tony Robbins engage in — sophistry — as they seek to manipulate their audience.

We are committed to revelation, the authority of the Scriptures, and rightly dividing the Word of God so that it speaks to the hearts of men and women, by the Spirit of God!

There is a supernatural element which accompanies preaching!

“Rhetoric” moves to the forefront when truth is downplayed in our culture, and in the church!

For some, the word “rhetoric” calls up — “sophistry.”

I understand the argument which is made in order to separate preaching from what some rightfully call “human persuasion.”  I have taught homiletics, pulpit speech, and basic communication theory for years, at Bible colleges and universities, seminaries, and public speaking on a number of secular campuses.  I have spent decades in preaching and teaching the Bible as a pastor — two-three-four times a week — and still do.

In fact, in Old Testament days, kings would hire “sophists” — a professional motivational speaker — i.e. the Rabshakeh — II Kings 18 — who was sent to persuade the enemy to just give up and not even fight.  His job was to convince Israel that it is a losing decision!

These professional speakers understood how to convince God’s people to give up and not even put up a fight.  As it is stated, “Error is halfway around the world before truth even has its boots on.” — just saying.

There is a difference between preaching and humanistic persuasion!  Preaching / Homiletics is not about those humanistic principles of communication taught by secular theorists, designed to manipulate an audience!”

The Apostle Paul, living and raised in a Greek culture — a Roman — made that distinction.  Paul knew the difference between engaging in sophistry, manipulation, trickery, tickling the ears of men to get agreement . . . . .

For do I now persuade men, or God? or do I seek to please men? for if I yet pleased men, I should not be the servant of Christ. — Galatians 1:10

. . . . . while at the same time Paul understood that we are called to communicate God’s truth as effectively as we can — for it involves the souls of men and their eternity!

Nevertheless, there is a meaningful difference between homiletics and “rhetoric” as we typically think of that word.  Indeed, preaching is a different kind of communication.

Notwithstanding, the difference which I believe is regularly misunderstood, and more likely missed is not the obvious — between “homiletics” and “sophistry.”  That is not the meaningful difference to which I am addressing.

The difference to which I am referring is absent in the many books and articles which address preaching-homiletics.

√  Preaching is different in “species,” but not just (sorry about the word “just”) because preaching has a supernatural element.

√  Preaching is different in “kind,” but not just because of the authoritative nature of its truths.

√  Preaching is different in “kind,” but not just because the Spirit of God can and does take the Words He has authored and applies them to the heart and soul of men.

It is different in kind BECAUSE OF ALL THOSE TRUTHS!

Would you not agree that there are similarities which exist between the three classical and versed areas of public address . . . .

Law: the argument of the courtroom
Politics: the debate of the “senate” (think Patrick Henry Era of British Parliament)
Religion: the spoken word of the pulpit

That whether it be in the courtroom, at a political debate, or in the pulpit . . . .

. . . . . that these various elements can be and probably are found in the practice of all three venues of public speaking?  Sometimes for the good of the listeners — Christians or not — and probably more often to move an audience towards the speaker’s self-serving purposes — and/or even to manipulate the listeners towards far-far less noble goals.

How one argues
What examples are used
What the word choices are in relationship to this-or-that field of endeavor
The adaptations made when speaking to adults, young people, and even children
The different vocal styles of various public speakers
The different kinds of materials used to illustrate a point
The great-to-terrible delivery of the message by the speaker
How credible the speaker is in the eyes of the audience
Etc.

. . . many of these  “rhetorical” elements play into most all public address situations — and even in preaching.

Like money, sex, power, influence, etc. — one’s speaking, communication, rhetorical skills, and abilities can be used for good and/or bad.  That does not mean that all the skills used are different. 3

There is an oft-missed meaningful difference.  Perhaps missed because it is unrealized and unseen.

It is just
because the Scriptures are inspired and authoritative, and
because there is a supernatural element operating in biblical preaching,
that a meaningful difference exists.

Homiletics as a field of study and preaching
are different in kind
are a “rhetorical hybrid”
BECAUSE OF ALL THOSE TRUTHS!

Where else in the world of public speaking is someone given the preeminent focal content which underlies the most important element of the speech and asked to address that content?

√  That is not the case in the courtroom — the lawyers prepare their briefs and examinations as they see best to effect the desired outcome.  The attorney — on either side of the case — who is laying out the facts in such a way as to establish a narrative, a storyline.

√  That is not the case in “politics” — Patrick Henry designed and framed the wording and arguments of his speech to the Second Virginia Convention.  In Britian, a Prime Minister (such as Tony Blair or Margaret Thatcher) is calling for a social policy based on their understanding and selection of the facts surrounding a social problem and arguing for what they believe to be the best policy to address that problem.

√  That is not the case with “religion” — those who do not see the Scriptures as verbally inspired and therefore authoritative.  Such speak out of their own wisdom, philosophical viewpoints, and/or psycho-social-academic thinking.

Our task changes — meaningfully — when we believe that the preeminent context of our message is not our own.

Our task is different once we believe that we have been given the preeminent focal content which alone is of divine importance.

There is no one else who has that unusual public speaking task — or is there?

No one engages in this “hybrid rhetorical form” of public address — or is there a group of people who do that same kind of public speaking?

Are there people from whom we can get a better understanding of what our task is and how it relates to our rhetorical skills?

Obviously, the answer is yes — there is — but we may not see them like we need to see ourselves.

There are public speakers who have been given their content — the content is not their own, but they have fallen in love with the content, as have preachers.

They did not compose the content — they may have no ability to do that if they wanted to create it.

These public speakers have come to appreciate art or music, and want to share the paintings or musical compositions with their audience.

They did not paint or compose the masterpieces they are talking about, but want to share with the listeners the . . . .

Their task is to speak in such a way as to excite the listeners with the beauty, form, and meaning of the many varied works of art and the varied artist.

Years ago I was listening to a lover of George Gershwin and his music.  It wasn’t just his music, but he fell in love with its style, design, form, construction, composition, Gershwin’s life and Gershwin’s own thinking/words about the music.  Gibbons did not present his personal opinions about Gershwin (I imagine some of that bleed over — as it does in preaching), but has Geroge Gershwin’s own words read by a professional reader to capture the warmth and flavor of G. Gershwin!

But, that is a different kind / species of public speaking as distinguished from law, politics, or religion.

While it is rhetorically similar,
it is a “hybrid rhetorical form.”

That is the speaking experience to which the preacher has been called — to share the content of another — to help people fall in love with what is said, how it is said, what the thinking behind it is, how it is said, what it says to us, why it was said this-or-that way, where else you can find it said and supported, how best to illustrated it, to clarify it, to have the listeners feel it, think like it, understand its terminology, etc.

1. The three areas of rhetorical endeavor which were identified by the classical rhetorical theorists, and which remain and operate to this day — law – politics – religion.  Today, it would be reasonable to include a fourth — the area of “business-commerce-corporate leadership

“Political:” Classical theorist did not speak of “political” discourse as the word is used today.  Today we speak of political speeches as referring to “political stump speeches” and/or similar debates/townhall forums.  Classical theories saw political discourse as that which took place in the Greek & Roman forums — the “senate” of that day.  Today, decisions are not made by powerful argument in the political arenas of Congress.  Great Britain has retained some of that flavor in their “House of Parliament” debates.

2. “Religion” in classical times was seen in a pagan sense, much like we might view that which is not Christian.  As we would say, “religion” does not speak of a relationship, but man’s many attempts to relate to God.

3. There are some illegitimate skills which are used and are different from speaker to speaker — i.e. a willingness to twist quotations/statistics, or an emotional appeal which short-circuits reasonable thought).   but the purpose of the one using it may well be!

4. Jack Gibbons loved and understood Gershwin so much, he has taken the piano rolls of Gershwin and transcribed them and performed – performs them!

2 thoughts on “Preaching: A Meaningful Difference – But Maybe Unseen and Unrealized”