A Strategy & Men Who Will Sacrifice

The Normandy Invasion was and is considered
the most decisive battle of World War II against Hitler.

The German army was facing the daunting task of covering more than 3,000 miles of French coastline.

Invasion: The invasion required a full moon and a “spring tide” (spring tide = little difference between high and low waters).

Approximately 5,000 transports, ships, and various vessels were used — “the largest armada in history.”

The strategy of D-Day was called — “Spread and Focus.”

Spread out the German army across various fronts far enough apart so that it would be difficult to send reinforcements once the invasion began.
and
Focus on one place for the invasion where the German troops would be the fewest.

The goal was to create a tremendous weak spot in the German defenses and then with overwhelming forces to break through the German line of defense.

The strategy relied on “the art of deception.”

“Dummy Parachutists” were also dropped away from the invasion site to pull additional troops away from Normandy.

Calais, France and the surrounding areas were repeatedly bombed to further the deception.

One of Norway by American, British, and Russian forces — “Fortitude North”
Another invasion of Calais, France from Dover, England.

The aim was to convince Hitler that a 350,000 man army was stationed in Scotland and ready to invade northern Europe.

“By April of 1944, the radio and airwaves over Scotland were humming with communications about the bustling movement of brigades and equipment in preparation for an overseas assault. One easily “intercepted” message planted by the Allies contained an order for 1,800 pairs of crampons and as many snow ski bindings.

The Germans monitored these communications and received confirmations from their own spies, who, in truth, were double agents working for the Allies. They also sent aerial reconnaissance over Scotland to get a look for themselves. German reconnoiters took pictures of hundreds of tanks and airplanes poised for the invasion. What their photographs did not reveal was that the planes were empty shells made of plywood and that the tanks were rubber “blow-up” models.” 1

The actual invasion was located in Normandy, France.

“In effect, the Allies fought and won battles using armies that did not exist. The fictional British 4th Army froze 13 German divisions in place in Norway, while the Germans held its 15th Army in reserve in the Pas de Calais region waiting for an attack by the equally fictitious.” 1

The military operation was two years in the planning.

More than 1,000,000 German soldiers were ready on the eastern front while the Allied forces attacked the western front.

“The art installation called The Fallen, created by Sand In Your Eye, was setup recently on Arromanches Beach, Normandy, France, to depict the bodies of the 9,000 soldiers and civilians who lost their lives during the Allied assault on Nazi-occupied France on June 6, 1944.” 3 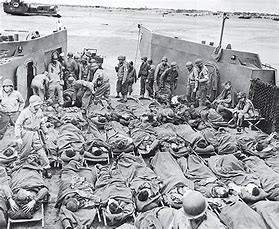 “[Strategy’s] purpose is to diminish the possibility of resistance, and it seeks to fulfill this purpose by exploiting the elements of movement and surprise.”

Churchill called the invasion — “The Beginning of the End”

“He who defends everything, defends nothing.” — Frederick the Great

• deception
• Satan
• the beginning of the end
• defending everything
• diminish resistance
• fake fronts
• temptation
• sin
• the last enemy is death
• sacrifice
• overwhelming force
• “a decision without any serious fighting”
• diminish resistance
• two other fronts
• spread and focus
• war / death
• world dominance / the Antichrist
• the coming battle of Armageddon
• thank you / thankfulness
• love of country
• One other “Man” — broke through and overcame Hell & Death.
• God had a strategy.
• Defeating Satan, Hell, Death, and the Grave
• Great love hath no man than . . . . .
• Others stood in our place.
• “spring tides” and full moons in life
• Hebrews 11: What would the beach look like if marked by those who fought.
• a strategy
• strategy & men who will sacrifice
• The Fallen
• “Oh the humanity”
• “All gave some.  Some gave all.”
• The Other Side Of The Hill 4

“On Utah Beach, US troops suffered only 197 casualties, the lightest of any beach, when they were accidentally landed in the wrong spot due to strong currents. Though out of position, the first senior officer ashore, Brigadier Theodore Roosevelt, Jr., stated that they would “start the war from right here” and directed subsequent landings to occur at the new location. Quickly moving inland, they linked up with elements of the 101st Airborne and began moving towards their objectives.” 2

Karl Von Clausewitz, Lidell Hart, and Sun Tzu are all well-known and recognized military theorists which are studied at most all War Colleges, such as West Point.

Reading the work and/or thoughts of such individuals is all part of being “an idea generator.”  I often use the work of Clausewitz to make a potent illustration.*

* Clausewitz indicates that there must be the defeat of two elements in any war.  #1) The will, and  #2) the resources.

If there is a will, but no resources wherewith to fight, the battle will be lost.

However, if there is a will, but no resources, the battle is only postponed (until the resources become available — China today).

If there is a will and the resources, the wars / battles will go on and on (Afganistan).