I thought I would ATTEMPT to post (Monday-Friday) a simple example of a present-day speaker’s use of analogy.

Providing examples of such “analogies” may be useful on three levels . . . . .

#1) To foster the ability to “see & hear them” — If you just bought a new car, you will begin seeing how many other people bought that same car after you did!

When rhetorical analogies are identified, you will notice that analogical wording will show up more and more in the news, magazine articles, television, advertising, and in your conversations with others.

“Just like anything else.  If you practice, you’ll get better.  It’s a muscle.  We all have analogical instinct, and some people have honed it more than others.”

#2) To Use In A Sermon — They might be able to be “teased out” and developed for use in a sermon.  I will try to give some possible examples of doing that at the end of this post.

#3) To use more “outside of the box” illustrations — These analogies will be taken from today’s speakers found in the world of news, sports, business, law, politics, and technology.   Rather than using analogies which may be dated or threadbare, I will attempt to post examples which are new, different, and fresh.  The examples will come from contemporary life — both from the secular and the sacred.

P.S.  Did you notice the analogies in the above points?

If you want to see the use and power of analogy, listen to Tony Evans.
Why is Evans so effective?
The reason is “hidden” in his use of analogy, which is subtle — far more covert than overt in the hearing of the listeners.

“By using analogy effectively, you distill something which is complex into something that, perhaps, is simpler, in there that your audience can understand.  The strength of a good analogy is that it is a story, a comparison with a spring-loaded conclusion.”

• are memorable
• provide clarity
• can drive an “argument”
• engage the audience
• make a point ….. succinctly
• add the visual

Context:  The various candidates were interrupting each other, perhaps rude, disregarding the attempts of the moderators to control the debate.

The Rhetorical Analogy: “Hey, guys, you know what? America does not want to witness a food fight. They want to know how we’re going to put food on their table,”

The audience response revealed the effectiveness of this “analogy” — of this . . . .

It is a “√ shortcut  argument” because it packs the point into a few words.  There is no lengthy development of the point which is being made . . . .

“You know we can talk while others are talking.  Interrupt one another.  Not follow the rules we all agreed to with the moderators who are trying to maintain order and say to America we have no common sense but are a bunch of crazy democrats.  Let’s stop the chaos and show some decorum.  Let’s communicate to our fellow Americans that we are interested in how they are doing economically and not just making our selfish political points on television tonight!”

It is a “shortcut √ argument” in that it makes a point.  I use the word “argument” because a point is being made by the speaker.  Do not read “argument” as in the idea of “debate” or “disagreement.”

Sometimes the “argument”
drives the clarity
and therefore
increases the force of the point being made.

“Food Fight”:  This analogy is a shortcut means of speaking of an out of control event. 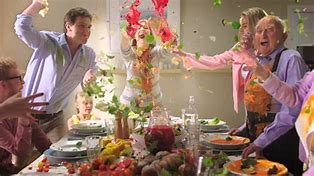 “A food fight is a form of chaotic collective behavior, in which food is thrown at others in the manner of projectiles. These projectiles are not made nor meant to harm others, but to simply ignite a fight filled with spontaneous food throwing. Food fights may be impromptu examples of rebellion or violence; however, they can also be planned events. In organized food fights, the food “weapons” are usually all of one kind, or of a limited variety. An impromptu food fight will use whatever food is on hand.”

“Food On The Table”:  Some pundits criticized the second analogy because they questioned whether Americans were actually experiencing the inability to put food on their tables.

That criticism misses the analogy! “Food on the table” — is a shortcut way to speak of the practical economic concerns of an average American family, not the actual absence of food.

Both analogies called up some clear visual images and drove the point in 23 words!

Rhetorical Deconstruction:  As I have frequently stated —  after you hear something done well, you can go analytical.1

As we listen, we can not only share in what the audience is experiencing.   We can think about our thoughts!  That is one of the characteristics of being image bearers, of being far different from all the created animals in our world.

When Senator Harris made that comment, we can not only respond to it as did the audience, but we are able to think about it on a different level of thought. . . .

Of course, it was effective and memorable because of the use of analogy!  But how did the analogy work?  Can we take the process apart, deconstruct it.

#1) Two Analogies Were Used:  Kamala Harris used two analogies.   The two analogies could be juxtapositioned to make the point together.

#2) Both Analogies Shared A Common Word:  Both analogies contained the word “food,” AND both called up an actual image food — and on a table.

#3) Both Analogies Reflect The Situation:  In one sense, it was a mixing of metaphors, yet the two analogies reflected both sides of what was believed to be happening.

“Sometimes, people, even God’s people, get stalled in the intersections of life and living.  They have run out of gas or are broken down.  Helping them move forward in life is not accomplished like pushing a button on a remote control.   You are going to have to go hands-on, get into that intersection of life, and push with them.– There will be nothing remote about it! . . . . . . ”

Now you can tease out that analogy.
You can now run with it!

One thought on “Analogy of the Day: Senator Kamala Harris”