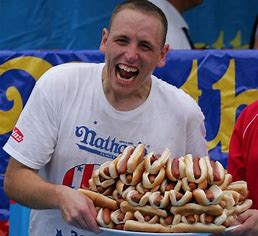 One of the most prominent supporters of that bill was John Stewart.1  After the bill was passed, Stewart stood before the cameras and issued a statement in praise of its passage in the House.

To make the point that the United States has the financial wherewithal to extend the program for another 10 years, at the cost of 10.2 billion — or approximately 1.1 billion a year — he stated . . . .

“This is the semi-finals.

The finals are two weeks from now in the Senate.

The men and women behind me have paved the way.

This is done.  This program works.  It has a need.

It is either needed and necessary or it is not.

“It’s very difficult to watch a House and a Senate with a trillion-dollar deficit, tryin’ balance that budget of 10.2 billion dollars over ten years, on the backs of 9/11 victims and first responders.

It’s like watching Joey Chestnut throw down 70 hot dogs in Coney Island and then at the end of it, not have a Coke  — cause he’s watching, you know, the calories.

And it is morally right.

And not only that — you have a program that works

It is faithful to the statue.

It is fair to the claimants.

And it is respectful of the tax player.

You cannot ask for anything more in a program.

This should be a simple as refilling its credit card.

√  Right before the analogy, Stewart makes two points when he states . . . .

“It’s very difficult to watch a House and a Senate with a trillion-dollar deficit,

tryin’ balance that budget of 10.2 billion dollars over ten years, on the backs of 9/11 victims and first responders.

#1) This bill should not be about balancing the budget, not in a country which is already operating on a trillion-dollar deficit.

#2) If anyone is trying to make their vote on this bill about holding down or reducing the deficit, they are seeking to do that on the back of victims— of first-responders.

√  Then, Stewart re-addresses the first argument —   How nuts to argue about a billion dollars a year when the nation is running a trillion-dollar deficit year after year for so many other things . . . .

It’s like watching Joey Chestnut throw down 70 hot dogs in Coney Island and then at the end of it, not have a Coke  — cause he’s watching, you know, the calories.

He uses the analogy for argumentative clarity.  He is asking the listeners to see the argument about deficit spending (and those who make that argument) for what it really is — “nuts.”3

To make such an argument would be like Joey Chesnut throwing down all those hot dogs and then convincingly making the argument that the reason he doesn’t want to drink a “coke” / soda is BECAUSE it has too many calories.

That is “nuts” after he has already consumed “a trillion calories!”

Making provision for sin while saying that you want to live for the Lord, is like a chipmunk storing up a tree full of acorns and saying that he is going to go on a diet this winter.

To say that you want the will of God for your life, and not having the discipline to read your Bible and pray, is like ignoring the maintenance of your car and still expecting it to get you where you want to go.

Expecting the ungodly to help you on to grace is like expecting the Devil to say — “Listen to and obey God.”

Fools, scoffers, and the perverse are not going to help you obey God.  Can you imagine Satan saying these words to Eve? — “You need to obey what God has spoken  . . . . .”

1. “Jon Stewart is an American comedian, writer, producer, director, activist, political commentator, actor, and television host. He hosted The Daily Show, a satirical news program on Comedy Central, from 1999 to 2015.”

3. “Nuts” can mean a lot of things, but Stweart is really implying that such an argument is specious/sophistic/ disingenuous.