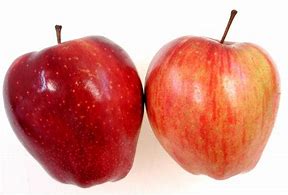 Not Two Unlike, But Too Very Similiar
Not Apples & Oranges, But Two Kinds Of Apples

A classical rhetorical concept revolves around what is called “Distinctio” — “to distinguish.”

It is not a new concept — if by “new”  you mean “distinctio” is not found in sermons today.  The use of the device called “distinctio,” can be and is found many sermons-messages.

“Distinctio” may be “new” to many speakers and preachers because they have not knowingly identified the concept-device.  Many preachers probably use the rhetorical device, but do not understand what they are doing when they do it — conceptually.

Using the device does not mean that you understand it — because you do not need to know what you are doing, to be able to do it.

However, knowing and understanding the concept-device gives one the ability to effectively and purposefully using it.  It becomes another “tool,” which can be employed as needed.

The value of understanding what one is doing is that a rhetorical device can be consciously used rather than “randomly” utilized.  When preparing a message (or even in the midst of a message) a preacher can call up this device consciously.

Here is an example of the concept or device being used by Joanne Mariner.   Mariner wrote a lengthy article in response to a Supreme Court decision (Hamdan v. Rumsfeld) concerning the “enemy combatants” who were now detainees at Guantanamo  . . . .

Indeed, like Jose Padilla, a former “enemy combatant” who was arrested in Chicago (and is currently a defendant in federal court), a significant proportion of the detainees held at Guantanamo were picked up far from anything remotely resembling a battlefield. Arrested in cities all over the world, they could only be deemed combatants if one accepts the Bush Administration’s claim of a literal “war on terrorism.”

And even if that strained analogy is accepted without demur, the administration’s talk of front-line troops, battlefields, and rapid decisions made under fire is still entirely misplaced. A review of these cases shows that the arresting officers are police, not soldiers, and that the places of arrest include private homes, airports and police stations — not battlefields.1

It all depends on what the word “battlfield” means!

Of course, President Wiliam Clinton is another example of the use of this rhetorical device — it all depends on what the word “is” means.  He is using it to make his argument, not to clarify or explain.

“It depends upon the meaning of the word ‘is’ is.  If ‘is’ means ‘is and never has been,’ that one thing.  If it means ‘there is none,’ that was a completely true statement.”

Likewise, the word “jealousy” in the Bible can mean something sinful or something sinless — or “covet” or “proud.”

There are times when a distinction must be made between the different meanings of a particular word.  In fact, if a distinction is not made in the thinking of the speaker, he may injure his credibility — more later on that.

That does not mean it is a concept or device which ought to be employed without a clear need and purpose.  Yet, it does mean that there are times when a speaker needs to consciously use this device to clarify, or make the argument, or explain, or correct a common misunderstanding.

I knew what was happening, and I also knew that the speaker’s credibility was being damaged by such a comment.

What was happening was that the word “proud” can be seen as a derivative of pride, OR it can be seen as the opposite of “ashamed.”  It is a good thing that our children do not make us ashamed of their actions or decisions.  Indeed, I am, and you are proud of your children when they make good and godly, wise and productive, right and compassionate decisions — when we are not shamed by what they do.

I also recall thinking that when a speaker fails to make such a distinction in his own mind  — in his time of preparation —  he will end up damaging his credibility with the audience.

What will the audience hear?  Even if you think that you are not saying that
Where will they get lost because they have a different understanding of that word?
What can cause some real misunderstanding?
Where should there be some clarification?
Will that cause the audience to think — “Not sure that is accurate.”
How is this different from that?

It is not a new concept, if by “new”  you mean “distinctio” is not found in pulpit speaking.  The use of the device called “Distinctio,” can be and is found many sermons-messages.

1. https://supreme.findlaw.com/legal-commentary/it-all-depends-on-what-you-mean-by-battlefield.html
Another Example:  If a tree falls in the forest, and there is no one to hear it as it falls, is there any sound?  Depends on what “sound” means!