The use of an analogy is both simple and powerful.

If you disagree, go to the bottom of the page and see for yourself!

Hold Off And Read Down To It!

Again, I saw the simplicity and power of analogy visualize — but it can also be put into words for use in a speech or a sermon.

Let me build the “word template,” and then include the simple visual analogy, which is “worth a 1000 words.”

“What  variety of animals this world is populated with, and how different they are in their defensive abilities.”

(A brief narration about a porcupine)

“Take the porcupine.  We may not have seen many, but we immediately know what porcupine looks like.  It is distinct with its needle-like quivers visibly protruding from its body, announcing its defensive option.

“Then there is the skunk. If you spotted a skunk, you would almost think it to be a rather harmless animal, but it is hiding its defensive abilities. It has the ability to spry out a liquid, a fairly good distance, a liquid that has a strong, pungent, and unpleasant smell. “

With “Concealed Carry,” your weapon is not easily seen or even seen at all.  Like the skunk, you may look harmless enough.  But your defensive weapon is at your disposal should you need to use it.

Include more or less information on the porcupine as helps. . . .

Once the analogy is made, a simple brief reference back to it is all that is need to call up the whole of it . . .

“It’s the porcupine and the skunk.” 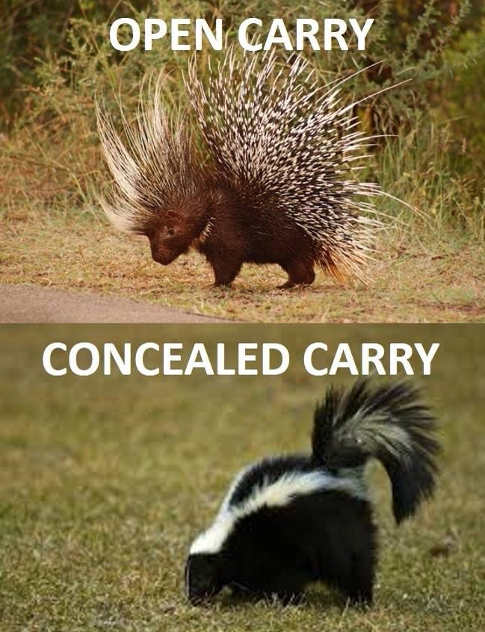