Shockingly, concerning the influence of “television” and even technology, John Stott wrote this in 1982 . . . . (One need only ask what he would think today!)

Stott decried the impact of television and stated . . . .

While Stott sought to balance the value of the secular visual, he also realized that there was a serious lack of relevancy in the sermons of his day.  The preacher was between two worlds!  — between the then “modern secular world” and the Bible.

“. . . . preaching is not exposition only but communication, not just the exegesis of a text but the conveying of a God-given message to lining people who need to hear it. . . . Now a bridge is a means of communication between two places which would otherwise be cut off from one another by a river or a ravine . . . . Our task is to enable God’s revealed truth to flow out of the Scriptures into the lives of men and women of today. . . . Nothing has brought home to me more forcefully the gulf which people perceive between the Bible and themselves, and so the challenge which confronts Christian preachers today.” 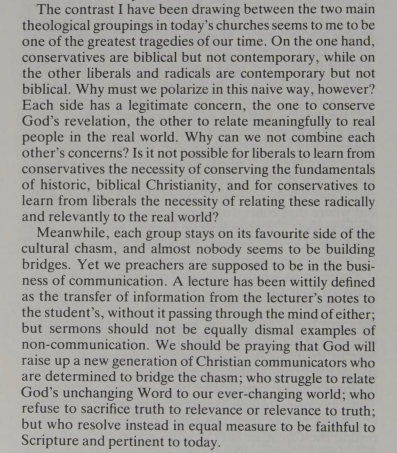 “I recognize that there are perils in the claimant demand for relevance.  If we become exclusively preoccupied with answering the questions people are asking, we may overlook the fact that they often ask the wrong questions and need to be helped to ask the right ones.”

“If I were to draw a diagram of the gulf between the two worlds, and then plot our sermons the diagram, I would have to draw a straight line which begins in the biblical world, and then goes up in the air on. a straight trajectory, but never lands on the other side,  For our preaching is seldom if ever earthed. If fails to build a bridge into the modern world.  It is biblical, but not contemporary.  And if we are called to account for our practice of exposition without application, we piously replay that our trust is in the Holy Spirit to apply His Word to the realities of human life.

I hope my readers will forgive me if my diagram of conservative preaching is a hurtful caricature. . . . .almost nobody seems to be building bridges.  Yet we preacher are supposed to be in the business of communication . . . . We should be praying that God will raise up a new generation of Christian communc=icators who are determined to bridge the chasm; who struggle to relate God’s unchanging Word to our ever-changing world, who refuse to sacrifice truth to relevance, or relevance to truth; but who resolves instead in equal measure to be faithful to Scripture and pertinent to today.  This earthing of the Word in the world is not something optional; it is an indispensable characteristic of Christian preaching.”

There is a reason for the qualification . . .
“apt to teach.”

One thought on “Rhetoric & Homiletics: Between The Modern World & Relevancy”