There are real pitfalls that sometimes accompany using the secular for an illustration. At times, a passage from a book, the scene from a movie, lyrics of a pop song, or a story about a secular pop star can clash with preaching and/or a worship service.

Sometimes, using the lyrics or scenes of today’s songs or movies requires too much “blipping.”  Even examples involving crude and/or overly descriptive language are not well received in a worship service — illustrative or not —  and rightfully so.

At other times, referencing secular musicians or actors calls up their known immoral lifestyles. It all leaves the sermonic atmosphere morally reeking because of the audience’s awareness of the immorality of the various performers.

If you have listened to Alistar Begg for any length of time, you recognize how often yet how careful he is in the citation of secular music lyrics. [1] His approach provides some helpful pointers on using the secular.

#1 — Make The Purpose Clear: Alistair Begg typically frames their words in an analytical way, as opposed to a personally entertaining context. The purpose for citing such material is analytical; it reveals and exposes the thinking of the world.

Begg frames the use of the lyrics — analytically. He puts the lyrics in an investigative context to communicate that they are being referenced for insight into the thinking of this world. He does not leave you with the impression that he is personally engaged with or absorbed by this-or-that form of entertainment and/or entertainer.

Here are some ways to communicate that analytical approach . . . .

“If you want to see, grasp, if you want to understand how the world around us is thinking – these lyrics reflect this world’s thinking — the way it sees life and when living when it comes to . . .”

Begg understands how to frame it and set it up when he references secular artists. He seemingly never gets caught up with the secular song, its lyrics, or the artist. He calls up the music within an insight context.

#2) Be Very Careful & Selective: Alistair Begg chooses secular music from an era of music that is far safer than music and lyrics of other more recent eras — (Yes, the era also reflects his age). Begg is well-known for citing song lyrics from the 50s-60s and ’70s. Typically the artists and song lyrics are still known today. The songs and lyrics of that era and the artist he cites are not as decadent as some of the more contemporary secular music and the artists of today.

#3) Stay Focused: Begg’s use of songs/lyrics never overpowers the sermon as a whole. You hear enough of the song to understand the point being made. Keep it as short as possible! The Alistair Begg clip cited below runs from the 12:19-13:16 mark.

You may have heard pastors cite movies, so extensively (even to the playing of what seemed to be a far too long movie video cut), that one could easily be left with the impression that the preacher is more caught up with the movie than what the Scriptures have to say to us about life and living.

Go back to the secular example and see what you can cut out without losing the point. Keep the quotation of the artist’s lyrics as short as possible! Don’t get caught up with whole, but the point. Multiple stanzas may make the same point, but making the point with one stanza, or a mixture of statements from different stanzas is sufficient.

Likewise, at times, a speaker/preacher wants to relate the plot of the whole story, movie, or book. They begin explaining the characters, the fictional or actual events leading up to this-or-that story point, and even the plot. Stay focused!

“In this song John questions the meaning of life. He figures that he has “the dream”, money, friends, people who care about him, girlfriends, etc. But yet he still feels as if he is incomplete.”

“Something’s Missing”
I’m not alone, I wish I was.
Cause then I’d know, I was down because
I couldn’t find, a friend around
To love me like, they do right now.
They do right now.

I’m dizzy from the shopping malls
I searched for joy, but I bought it all
It doesn’t help the hunger pains
and a thirst I’d have to drown first to ever satiate

When autumn comes, it doesnt ask.
It just walks in, where it left you last.
And you never know, when it starts
Until there’s fog inside the glass around your summer heart:

I can’t be sure that this state of mind, is not of my own design
I wish there was an over the counter test, for loneliness.
For loneliness like this.

How come everything I think I need, always comes with batteries
What do you think it means

How come everything I think I need, always comes with batteries
What do you think it means

“Every day she takes her morning bath

she wets her hair

dipping in the pocket of a raincoat

and at the office where the papers grow

she takes a break

she pours a cup of coffee

and she tries so hard just to stay awake

The Rolling Stones are in town singing what? Singing their mantra . . . reinforcing what Solomon says . . . . I Can’t Get No Satisfaction . . . .

“Why do we never get an answer

When we’re knocking at the door

With a thousand different questions

About peace and love and war”

And then he comes to himself

“I am looking for someone to change my life

I’m looking for a miracle in my life.

Life is a hugh appetite that can never be satisfied . . . . If you have been trying to unscramble your life by filling it with a relationship . . . intellectual pursuits . . . . along the lines of an emotional trip . . . and the sooner that a man or woman faces up to this, the sooner they can make sense of their life.”

Recently, I’ve been thinking about why I was never able to memorize the periodic table of the elements. Our science teacher would unroll a canvas screen that contained them all—top left was hydrogen, and top right was helium. That is about as far as I got! But why was that? After all, I have at least an average memory.

The first answer is because I didn’t have to. The educational system at that time made it possible for me to choose a track that bade science goodbye in favor of “the arts.” I seem to recall one of my teachers writing on my report card a statement that went something like, “Alistair has decided that science is not for him, and he is very firm in his decision!” And that provides the second answer: I didn’t care to. School chums who were able to rattle off the symbols were intrigued and excited in a manner that was foreign to me. But when it came to history or poetry or literature, that was a different story.

The same was true of song lyrics, both sacred and secular. As a child, my life was filled with books and songs, and I quickly discovered that the words of songs came easily to me. The distraction of television did not arrive until I was twelve. I mention this because I am frequently asked how and why it is that I quote so many hymns and songs in my sermons. It is not as though I go searching for them; they come looking for me!

Since the program is comprised of listener favorites this month, I thought I’d share some of my favorite songs.

From early childhood, the hymn “I Think When I Read That Sweet Story of Old”:

I think when I read that sweet story of old,
When Jesus was here among men,
How He called little children as lambs to His fold,
I should like to have been with them then.

I wish that His hands had been placed on my head,
That His arm had been thrown around me;
And that I might have seen His kind look when He said,
“Let the little ones come unto Me.”

The hymn’s author, Jemima Luke, wife of a minister, then writes of how Jesus has gone to prepare a place for all who are “washed and forgiven.” In a subsequent verse, she sets forward the mission of the church:

But thousands and thousands who wander and fall
Never heard of that heavenly home;
I should like them to know there is room for them all
And that Jesus has bid them to come.

I long for the joy of that glorious time,
The sweetest and brightest and best,
When the dear little children of every clime
Shall crowd to His arms and be blest.

From teenage years, the hymn “O Jesus, I Have Promised”:

O Jesus, I have promised
To serve Thee to the end;
Be Thou forever near me,
My Master and my Friend;
I shall not fear the battle
If Thou art by my side,
Nor wander from the pathway
If Thou wilt be my Guide.

O Jesus, Thou hast promised
To all who follow Thee
That where Thou art in glory,
There shall Thy servant be;
And Jesus, I have promised
To serve Thee to the end;
O give me grace to follow,
My Master and my Friend.

The writer, John E. Bode, an Anglican clergyman, based this hymn on John 12:26. It was my baptismal hymn.

From adult life, the hymn “When This Passing World Is Done”:

When this passing world is done,
When has sunk yon radiant sun,
When I stand with Christ on high
Looking o’er life’s history,
Then, Lord, shall I fully know,
Not till then, how much I owe.

The writer, pastor Robert Murray M’Cheyne from Edinburgh, died far too young at the age of twenty-nine.

The lyricists of popular music I admire most are Paul Simon and James Taylor. This month, as Susan and I celebrate our wedding anniversary, I have been enjoying Taylor’s song “You and I Again.” It’s a love song he wrote for his wife, in which he reflects on the swift passing of time and explains how he wishes they could rerun the tape. This is exactly how I feel about the “American girl” who has been “under my skin” (think Frank Sinatra) for fifty-three years and by my side for forty-six. She is “My Dearest Friend” (think Abigail Adams).

You and I again, these days go by
And I wish that I could slow the whole thing down
And have it back again, just one more time.

Perhaps these reflections will cause us to love Jesus more, to love those He has given to us along the road, and to remember with fondness those who have been gathered to His nearer presence.

With sincere thanks for all your encouragement and support, and with my love in the Lord Jesus. 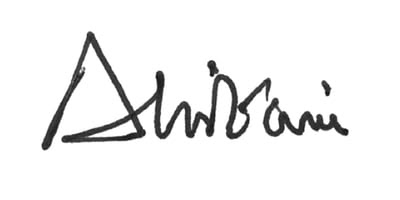