[include whatever material you find useful]

The point of the siren — to both alert the pilot as to his airspeed so that he would not need to necessarily look down at his instruments and could remain focused on his maneuver,

Because creating FEAR is a tactic.

That was the role of the Rabshakeh in II Kings 18 — to instill fear, to break their confidence that the Lord would deliver them from the Assyrian hands . . . . .

If an aircraft would perform a powered dive (with the engine running at normal RPM), it would very quickly overspeed, developing rudder flutter, breaking the control surfaces and risk a full speed stall. From the ground you would hear the engine sound rise in pitch as the aircraft approaches, but it is just the Doppler effect. It would not make any kind of “screaming” sound.

However, I guess you are referring to the specific howling sound of the German Ju-87 StuKa (Sturzkampfflugzeug) dive bomber, popularized in many WW2 movies – kind of the “Wilhelm Scream” stock sound of dive bombing aircraft.

Before going into its sound, let’s (just for fun) look at how this aircraft was used. 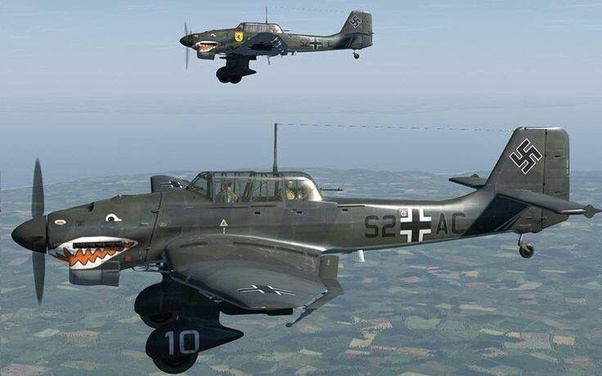 When a bomb dive was performed with the StuKa, the aircraft was first rolled over inverted on its back. The throttle was pulled back to idle to minimize the risk for overspeeding, dive breaks were extended and the engine cooling flaps were closed. The pilot would then pull on the stick to make the aircraft perform a half loop into a near vertical dive, maintaining an airspeed of 500-600 km/h while aiming at the target using a special bomb sight (called the StuVi).

The bombs were dropped at a predefined altitude (minimum 450 meters) and the pilots then needed to maneuver out of the dive before running into the blast zone of the ordnance. 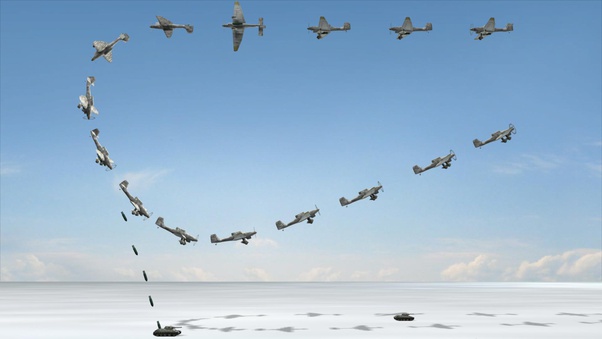 For the StuKa pilots, the bomb runs were not easy. Besides obviously being fired upon, during the take-up phase the pilots needed to endure 6G of acceleration without any G-suits or G-LOC training. Even though most of them were young and fit, they often blacked out temporarily and performed the maneuvers in a “dream-like state” while “seeing stars” as some described it.

To assist the pilots, the aircraft was equipped with special pull-up brakes under the wings that would automatically deploy if the pilot would fail to recover from the attack angle in time, e.g. by having lost consciousness due to the g forces. Some pilots weren’t too happy about this feature though, as the automatic pull-up made the aircraft rather predictable for AA batteries.

Anyway, because of the lower RPM of the engine during the dive, the aircraft actually became much more quiet during the bomb delivery phase than during level flight.

To add an element of terror (and possibly also to provide audio cues for the pilots to be able to judge the airspeed without looking at the dashboard), special sirens were attached to main undercarriage, called Jericho-Trompeten (“Trumpets of Jericho”). It was a propeller-driven siren with a diameter of 0.7 m (2.3 ft) mounted on the main undercarriage legs on both sides, but most often with the propeller attached just on one side.

The siren was of course only engaged when the dive brakes were extended, so the pilot didn’t have to listen to his aircraft howling all the way to and back from the target.

The sound was meant to induce fear and to weaken the morale of the enemy, mainly civilians. It was a simple construction, but super effective: one can imagine how it must have felt hearing this eerie sound approaching, like a banshee from above. Sometimes also the bombs were equipped with mechanical sirens to enhance the terror effect when deployed against infantry (bombs normally do not “whistle” like they do in Hollywood movies).

Later models of the Ju-87 were not equipped with the siren, as it would not have any effect against armored targets, whose crew wouldn’t hear the sirens anyway. And also because of its negative effect of the max airspeed of the aircraft, by about 25 km/h, of an already slow aircraft.