Who: David Epstein, “The Sport’s Gene: Inside the Science of Extraordinary Athletic Performance”

“After my college running career ended, l became a science graduate student and later a writer at Sports Illustrated. In researching and writing The Sports Illustrated. I had the chance to blend in the petri dish of elite sports what initially seemed to me to be wholly separate interests in athleticism and science.

The reporting of this book took me below the equator and above the Arctic Circle, into contact with world and Olympic champions, and with animals and humans who possess rare gene mutations or outlandish physical traits that dramatically influence their athleticism. Along the way, l learned that some characteristics that I assumed were entirely voluntary, like an athlete’s will to train, might will also have important genetic components, and that others that I figured were largely innate, like the bullet-fast reactions of a baseball batter or cricket batsman, might not be.” — [1] The Sports Gene

Each of these books arrives at a broadly similar conclusion: that it is practice that matters most; that, as David Epstein puts it, “accumulated practice is the real wizard behind the curtain of innate talent in fields from sprinting to surgery”; and, taking the theory to its logical conclusion, that “10,000 hours is both necessary and sufficient to make anyone an expert in anything”. But, as Epstein argues in this captivating book, and illustrates with countless case studies, it is often neither.” [4]

“East African middle and long distance runners are currently the dominant force in athletics. As well as dominating the track events at the last several Olympic Games, they are also dominant on the American and European road racing circuit and world cross country events.” [5]

“The statistics are hard to ignore. This medium-size country of 41 million dominates the world in competitive running. Pick any long-distance race. You’ll often find that up to about 70 or 80 percent of its winners since the late 1980s, when East African nutrition and technology started catching up with the West, have been from Kenya. Since 1988, for example, 20 of the 25 first-place men in the Boston Marathon have been Kenyan. ” — [6]

. . . . If you were to engage in a scientific study of the great and godly Bible characters recorded for us in the Scriptures, you would find a common trait, not a common geographical location, not a common upbringing, not shared socio-spiritual advantages, and not a common gene . . . . because it is not a genetic trait, but a character trait that marks godliness and greatness. . . . .

Psalm 78 tells a story.  There is a story being told by the psalmist, and the story ends with an identification of that common trait which marked David . . . while he was as a shepherd boy. . . .*

1. The Sport’s Gene, by David Epstein

The overwhelming number came from ONE area of the world, East Africa, and from one Kenyan Tribe, in the Rift Valley! 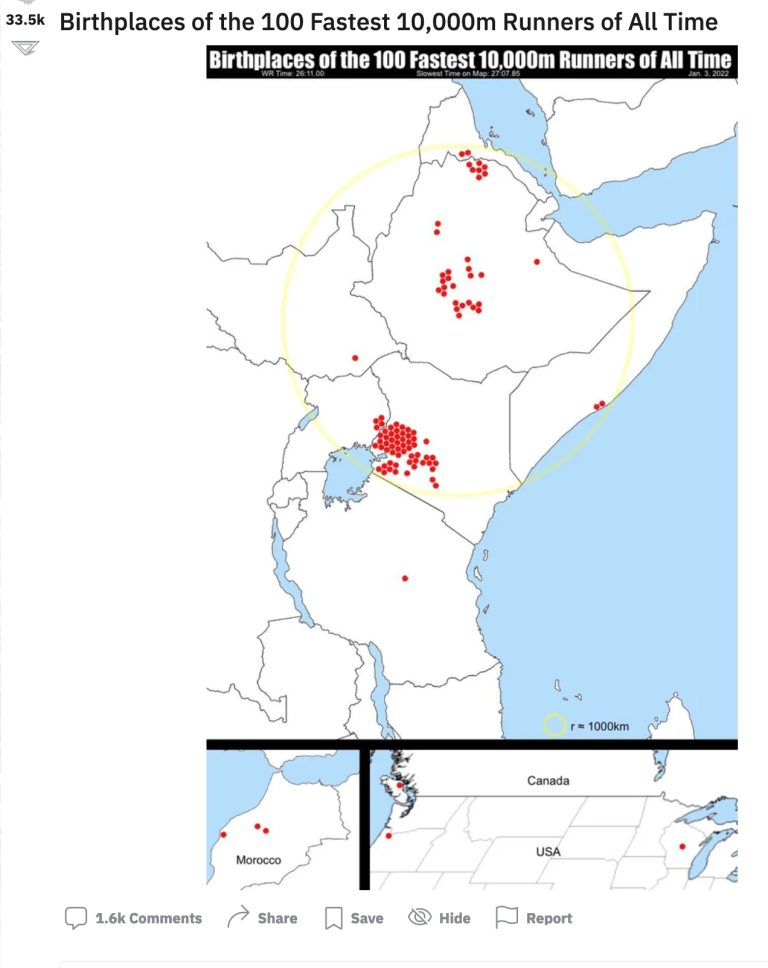 One thought on “Today’s Illustration: Is There A The Sport’s Gene?”