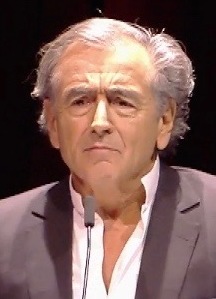 What: A documentary titled, “The Will of See,” is aptly labeled.

[A] new documentary, called “The Will to See,” in which you take the audience to the worst parts of the world. Syria. Iraq. Libya. Somalia. Nigeria. I have to tell you, I was heartbroken watching this film. There you were, in your trademark crisp white shirt, trying to shine a light on the worst human rights abuses in the world. And then, at the end of the film, we learn that literally almost every survivor, every hero, in the film is now dead, swallowed up by the very forces you are trying to expose.”

“An old-time war reporter, philosopher and writer, Bernard-Henri Lévy is sent by a group of newspapers (Paris Match, La Reppublica, The Wall Street Journal and others) to bear witness and report from places in the world where suffering and misery is at its peak, where wars are going on under our noses, where the world’s destiny is being determined an no one, it seems, is paying attention. An unflinching look at the most urgent humanitarian crises around the globe. [1]

. . . . “Sometimes, it takes a will to see. Sometimes, it takes a willingness to see things as they actually are! It is possible not to care because we don’t care to see. We can turn a blind eye to this-or-that, until it affects us. We can be willfully ignorant because to know means we must act — to know is to be pained over what is actually happening. Yes, ignorance is bliss . . . .

Jonathan had a will to see what was actually happening with his friend David. He would not turn a blind eye to what his own father was intent on doing. He would not be willfully ignorant. . . . . .

Other Information and Links: