A “Ghost town” is a town that at one time was thriving, and now it is a place where there are no longer many or any residents.

“Ghost towns are often described in terms of “what was” or “what could have been.” During their heydays, these once-booming places were often filled with both people and hope. Today, they are decaying shells of promise and prosperity. They can be haunting, sad, exciting—sometimes perfectly preserved time capsules.

America is home to a plethora of mining and frontier boomtowns, whose heydays only exist in memory. In Drummond, Montana, one of the last remaining vestiges of the region’s Gold Rush stands frozen in time, while in the middle of the Mojave, a former silver mining town creates a picturesque setting amid a desert landscape.”  [1]

“Basically, a ghost town is any historical town or site that leaves evidence of a town’s previous glory. This could be in many forms — all businesses closed, municipal services at a minimum, rubble and old nails strewn about, ruins of former buildings, etc. Some places that are categorized as ghost towns; however, still have people living in them and though sometimes they don’t want to be called a ghost town, most historians will continue to reference them that way if the reason or purpose for it’s original “boom” is gone. [2]

Where:  Pithole, Pennsylvania — One of many examples of a large American city which became a “Ghost Town.”

“Pithole City burst onto the scene as a brand new town in Venango County in 1865 and would quickly become one of the most successful, busiest towns in Pennsylvania. But, the happy story would be short lived.” [3] 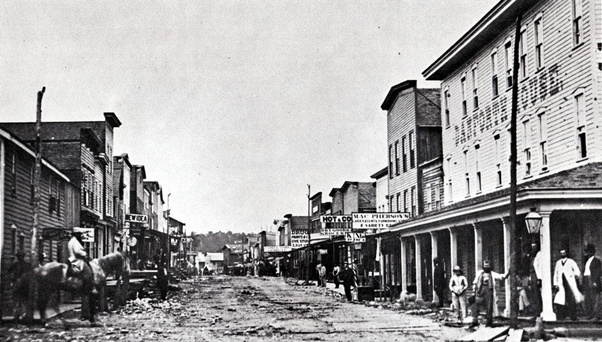 “What to look for in a ghost town.

(use whatever information from above you find useful)

* Nature has reclaimed the land
* Abandoned buildings
* Functional, but much small than its boom years
* Roofless buildings

What would be the signs of Ghost Ministries or Ghost Churches?  They do exist, and there are some clear indicators that they are no longer effective, productive, or reflective of their past history.  The Bible has a word for such ministries — Ichabod — I Samuel 4:21!

“Oil production was centered in the valleys of Oil Creek and the Allegheny River when the 250 barrel-a-day Frazier Well drilled along Pithole Creek came in. Numerous other gusher wells in this isolated part of Venango County attracted thousands of fortune-seekers to the area and a town called Pithole City sprang up on the Thomas Holmden Farm in May of 1865. By September, 15,000 people lived in Pithole which had 57 hotels, a daily newspaper, and the third busiest Post Office in the state, handling more than 5500 pieces a day! But Pithole declined almost as rapidly as it grew. A combination of oil running out, major fires at wells and hastily constructed wooden city buildings, and new wells in nearby places caused the population to shrink to less than 2000 by December 1866. Today, little remains of this boomtown but cellar holes in a hillside meadow. Visitors may walk the grassy paths of former streets and view a scale model of the city at its peak in the Visitor Center which is open Memorial Day through Labor Day, Wed. Noon-5; Thurs.-Sun. 10-5. An Admission is charge.”  — ghosttownsusa