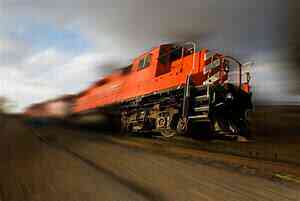 Do a web search of “type of Christ.”  You will find out that there seems to be no Bible character which cannot be made a type of Christ.

“Christ In All The Scriptures” is turning into a runaway train!

It may well produce a “theological train wreck” — if it hasn’t already — by allowing people to come up with all kinds of twisted and stretched ideas about what the Bible teaches.  Once you allow a hermeneutic which opens the doors to analogies, comparisons, types of, pictures of, etc. — in the name of “Biblical Theology,” there are no brakes which can argue that this-or-that connection is inaccurate, unfounded, or just wrong.

Do you want to see what happens when you take this approach to the handling of Scripture?  The following example bespeaks the mistaken hermeneutic which resides behind the current day fad called “Biblical Theology.”

7 ways Abigail is a type of Christ

This is what you get when there are no rules for the road.  When everyone who is driving the theological car of typology gets to draw whatever associations and connections they like or favor!

See a more extensive list of so-called types of Jesus Christ below.*

While all Scripture assumes Christ,

all Scripture is not about Christ.

√  Merely because a Bible character exemplifies a character trait which marked Jesus, that does not qualify him/her as a type.

√  Merely because a Bible character engages in an action which can be connected to Jesus does not qualify him/her as a type.

√  Merely because a Bible character’s name speaks about a trait, characteristic, or attribute of Jesus does not qualify him/her as a type.

√  Merely because there is a connection between Jesus and a biblical character (i.e., Jesus was of the tribe of David / Judah) that does not mean that one is a type of the other.

√  Merely because the name of Jesus is found in a verse with another Bible character (i.e., Jesus & Noah) that does not mean that one is a type of the other.

√  Merely because Jesus engaged in actions which other Bible characters also engaged in does not qualify one to be a type of the other.

√  Merely because the work of Jesus on Calvary was sacrificial does not mean that every or any Bible character which exemplifies personal sacrifice is a type of Jesus.

√  Merely because a person in found in Hebrews 11 — Great men and women of faith — does not mean that he or she is a type of Christ, but they are men and women who exhibited great faith and perserverance!

The fact that one can make a connection or draw an association between  . . . .

. . . . and Jesus the Christ  — or press an association into service to provide such a link — does not mean that this-or-that is a type of Christ, or that it was ever designed by God to be used as even a picture of Christ.

“The Bible student should be careful to distinguish between the possible, the probable and the certain” (Oswald Allis). . . . True types are to be distinguished from fanciful or imaginative interpretations of Scripture. They are not afterthoughts cabalistically read back into the Old Testament story, such as was the habit of many church Fathers, especially Origen.” — http://www.tecmalta.org/tft155.htm

While even this article portrays some glaring inconsistencies in its willingness to allow broad hermeneutical boundaries concerning what constitutes a type, the author reveals what he sees happening in the world of so-called “Biblical Theology.”

* The list of articles, sermons, books, and lessons which make various Bible characters “A Type Of Christ” speak loudly about this hermeneutical approach to the handling of the Scriptures!

The multitude of “types” reveals exactly what is mistaken about this approach to Scripture.

A small sampling of articles, chapter, and sermon titles . . . .

Note: The Writers Of The Scriptures Never Make David A Type Of Christ, Explicitly or Implicitly.  List out every verse which mentions David and Christ or Jesus!  Merely because a covenant was made with David, which promises that Jesus will sit on the throne of David, does not make David a type of Christ!

Solomon’s Life as a Type of Christ in 1 Kings

2 thoughts on “Where Are The Brakes: Christological Preaching – Part 1”