Maine is the only state in the union which is only bordered by one other state.

Maine was originally a colony of Massachusetts.

Desert Island is composed of four town, Bar Harbor being one of the four, and the largest.

Mount Desert Island became a summer retreat for the Rockefellers, Morgans, Fords, Vanderbilts, Carnegies, and Astors and DuPonts — to name a few of the most rich and famous of the 19-20th century.   They built mansions on the island.

“BAR HARBOR, Maine — Serving as a summer retreat for Rockefellers, Vanderbilts and Morgans, this town and the surrounding area have long been known as a place where well-heeled and well-known visitors could beat the heat — and have their privacy respected.

President Barack Obama is the latest influential visitor to flee to Maine in search of a cool ocean breeze. When he arrives Friday for a three-day visit, he’ll be the first sitting president to visit Mount Desert Island since William Howard Taft a century ago.” — fox news

Vice President Nelson Rockefeller was born in the town on July 8, 1908

Bar Harbor is a town located on Mount Desert Island, in the state of Maine.

Acadia National Park, located southwest of Bar Harbor is one of the most well-known National Parks in the United States

“That name was derived from a sand bar, which connects Mount Desert Island with another island nearby.“

Where Bar Harbor Gets It’s Name

What would a trip to Bar Harbor be without a journey down to the sand “bar” that gives the town it’s name. For the unfamiliar, the sand bar is exposed at low tide. Over the next few hours when the tide comes in — the bar eventually fills in with water from the ocean. You have to check the tide charts to know when to arrive if you would like to walk out on the bar and over to Bar Island. Once you get to the island there is a path to a trail that takes you up to the top of the isalnd where you get a great view of the town of Bar Harbor. Bring a camera because it is a great photo op. The trail involves a little bit of climbing but nothing too strenuous. However, you must keep your eye on the time and be sure to leave the island with enough time to walk back to the town and across the bar without having to swim!” — trip advisor 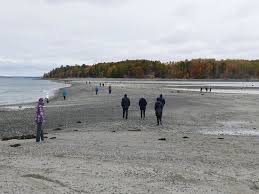 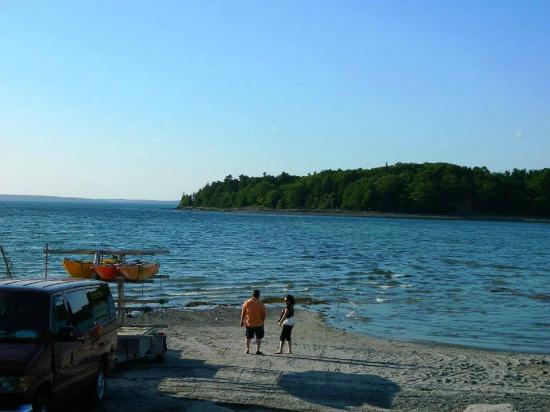 The “bar” is filled with rocks of all different sizes and shapes, as well as sea glass, star fish, and shells.

Tourist spend time walking across and back the bar during low tide.

You can drive across this “bar” or  land bridge with a car or truck.

BAR HARBOR — For the third time this year emergency crews were called to the Bar Island sand bar to remove a car inundated by the rising tide.

“A sign at the end of Bridge Street warns motorists that the gravel bar connecting Bar Island and downtown Bar Harbor is under water at high tide.”

On Sunday afternoon, three people and one vehicle stranded on Bar Island when the tide came in were advised by the Park Service, because they were not in distress, to wait until the next low tide and drive themselves back.

If you’ve stayed so long on Bar Island that the only way off – the sand bar to Bar Harbor – is several feet under water, don’t expect a rescue unless it’s a true emergency.

Even though parking is now prohibited on the bar, people can still drive across, and hundreds more walk to and from Bar Island each day. Each year several vehicles end up being submerged by the incoming tide when drivers have ignored the no parking warning.

On a few occasions in the past, private boat owners have rescued people stranded on Bar Island. That was the case last week when lobster fisherman Steve Burns went to the aid of a group of seven people on the island.”

“Six cars partially or fully submerged in the 2017 season!”

Bar Harbor is known for some of the most beautiful and scenic sights, Acadia National Park, and a history of summer homes for America’s rich and famous — (include any of the information above for interest).

However, what many might not realize is that “Bar Harbor” is called “Bar Harbor” because of the famous earthen bar which spans between Bar Harbor Island and Desert Island.

You can walk from Bar Harbor to Bar Harbor Island on the “bar” or land bridge.  Yearly visitors  — 1000’s of the 3 plus million who visit Bar Harbor every year — take that walk across the bay on that wide land causeway over to the other side with their families — picking up rocks as keepsakes.  The walk takes about 30 minutes if you are distracted by this or that odd shaped or colored rock here and there.

However, the visotors are warned that the tide rises 12 feet at high tide, completely covering that earthen causeway.  Nine hours later  — at low tide — the walkway across to Bar Harbor Island is again exposed.

No matter how many warnings are given there are still those individuals who do not read the signs which are posted!

Cars are submerged in the salt waters of the bay, which typically “totals” the car.

People are stranded on the island for up to nine hours, waiting for the low tide in order to walk back across the land bridge.

Why?  Because people refuse to read the warnings or believe that it might happen to them.

• warnings
• told and didn’t listen
• We’re okay. — We got this.
• total loss
• window of opportunity
• stranded in life – but for more than 9 hours
• a high tide just moved in
• there’s not always a land bridge back in life
• it’s low tide – take advantage of it in life
• read the instructions
• unheeded and submerged
• fun, sightseeing, rock picking can turn into trouble
• the tide may not come in for years in life and living
• keep your eye on the time