There Are Currents In Life!

On This Day: January 10, 1992 — The ship “Ever Laurel,” — weighing 28,904 tons —  owned by Technomar Shipping of Greece and operated by the Evergreen Marine Corporation of Taiwan experienced a steep roll, throwing two columns of containers, which were stacked six high on deck, to snap lose and tumble into the ocean.  Each container was approximately 8 feet wide and 20-40 feet long.

“In 1992, a shipping crate containing 28,000 plastic bath toys was lost at sea when it fell overboard on its way from Hong Kong to the United States. No one at the time could have guessed that those same bath toys would still be floating the world’s oceans nearly 20 years later. . . . Today that flotilla of plastic ducks are being hailed for revolutionizing our understanding of ocean currents.” – mnn

“Though no one knows exactly how many shipping containers are lost at sea every year, oceanographers put the figure at anything from several hundred to 10,000 a year, a startling estimate . . . .”

The rubber toys were made of durable plastic, and were by design “water-tight,” which gave the ability to last for decades on the high-seas.

The rubber toys were labeled, “The Friendly Floatees.”

The first sighting and landing of them were in the Sitka, Alaska area. 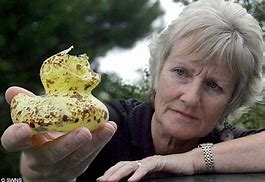 “Beachcombing in the Alaskan wilderness had suddenly come to resemble an Easter egg hunt.  A party game for children.  Four animals, each one a different color, delivered as if supernaturally by the waves: collect them all!” — Hohn

“They circled the northern Pacific once before being washed up on the Alaskan shore, then all down the West coast of Canada and the US.” — daily mail

The First Years Inc. offered a $100 US savings bond to anyone who turned in one of these floaties if it was recovered in New England, Canada or Iceland.

The four types of floating rubber animals were all “transformed” into being “rubber ducks” as the story was retold and truncated over the years.  It became the “legend of the yellow rubber ducks even though only one-fourth of the spill was that of yellow rubber ducks.

Moby-Duck: The True Story of 28,800 Bath Toys Lost at Sea & of the Beachcombers, Oceanographers, Environmentalists & Fools Including the Author Who Went in Search of Them — by Donovan Hohn

The story of these floating “ducks” appeared seven times in the Scholastic Magazine for kinds as they moved and migrated around the globe.

For the last 26 years, these “ducks” have been spotted, collected around the world — Alaska, Japan, Hawaii, over the sight of the remains of the Titanic, the Arctic Ice Pack, Main for the first time in 2003, Scotland, Bering Straits, and the North Pole.

The floating “rubber ducks” have been tracked to better understand ocean currents.

Ultimately the “ducks” will turn to dust — plastic powder.

The original rubber ducks were all marked by the words “The First Years.”

Two books were written based on this event:
Ducky was written by Eve Bunting
10 Little Rubber Ducks written by Eric Carle — “I could not resist making a story out of a newspaper report.”

“Luck Duck” was an animated Disney movie based on the event.

Collectors of these ducks find that the value of these “ducks” go as high as $1,000 “Through the years, Dean [Orbinson] patiently recorded the date and location where they found ninety of the fist-sized toys. This astonishing record reveals peak recoveries in five years with intervening gaps of 2, 4, 3, and 3 years, i.e., 1992–1994–1998–2001–2004. Each year, Dean and Tyler conducted comparable beachcombing effort so the peaks in the timeline are not the result of differing times spent along the shore. The first peak occurred before the Orbisons began recording, but a year in which other beachcombers reported hundreds. We may safely assume an initial peak in 1992, the year the playthings first invaded Sitka.” — beachcombers

• currents
• pulled by the currents of life
• the currents of this world
• understanding the flow / currents
• the garbage patch
• there is a pattern
• a greater understanding of the currents
• adrift
• wandering
• gyre of a wayward believer
• where will they show up
• Man Overboard — Jonah
• wilderness wanderings
• the sin nature and life’s currents
• floating back to where it all began — Joseph’s brothers
• a prodigal sighting
• Where do people end up when they go overboard?
• spiritual floaties
• church floaties
• snapped lose
• “The First Years”
• You are being “tracked.”
• Not all of life’s currents are known or mapped out
• the prodigal’s unrealized currents

“Over the years, a great wealth of unusual items has washed up on beaches around the world. In 2006, beachcombers scavenging the Outer Banks of North Carolina were greeted by thousands of sealed bags of Doritos tortilla chips that floated onto the beach, dry and still in an edible condition.

During a storm in 1990, a large wave washed 21 shipping containers into the North Pacific Ocean. 60,000 Nike shoes — en route from Korea to the US — splashed into the waves. Over the next year, hundreds of shoes — from hiking boots to children’s shoes — were discovered on the beaches of the Queen Charlotte Islands, western Vancouver Island, Washington and Oregon.” — cnn

Mr. Curtis Ebbesmeyer [Seattle Oceanographer] . . . . correctly predicted what many thought was impossible – that thousands of them would end up washed into the Arctic ice near Alaska, and then move at a mile a day, frozen in the pack ice, around their very own North-West Passage to the Atlantic.

It proved true years later and in 2003, the first “Friendly Floatees” were found, frozen and then thawed out, on the eastern seaboard of the U.S. and Canada.

So precious to science are they that the US firm that made them is offering a £50 bounty for finding one.