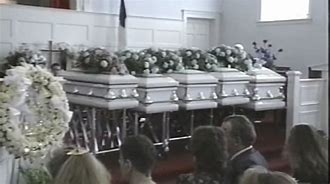 How Do You Get Through It?

On This Day: November 8, 1994 — Horrific accident claims the lives of all six children in the van of a pastor and his wife on I-94.

“The morning after a horrendous minivan accident killed five children of a Chicago minister and his wife, there was only more grief for family and friends: Hospital officials said a sixth sibling in the vehicle died overnight of burns covering 90 percent of his body.”  — Chicago Tribune

Married at the age of 20

Children (ages at the time of the accident):

Scott & Janet had three children early in their marriage and believed that the three children would be it.  However, Ben came along approximately 10 years later — Janet was now 34.  Decided to have another child who could grow up with Ben, and had Joseph — then had four more children for a total of nine children.

They were driving a 1994 Plymouth Voyager minivan.

On their way to celebrate the birthday of both their son, Dan, age23 and Hank, age 7 — to Watertown.

Scott hit a piece of road debris — believed to be a cast iron mudflap holder off of a truck which was lying the in I-94.

“Milwaukee sheriff’s police said they believe that when the 6-inch-diameter bracket was run over, it flipped up, pierced the van’s gas tank and caused gas to leak out. Seconds later, sparks caused as metal bracket dragged against the pavement ignited the van.

[Sheriff’s Sgt. — David] Iushowitz said witnesses told police that within seconds of hitting the debris, the van was engulfed in fire. After stopping, the husband and wife fled the van in flames. Passersby helped the couple douse themselves while another pulled out Ben. The Willises tried to return to the van to reach their other children but the flames were too intense.

“The father told us the children were all in seat belts, and the infant was in a car seat,” Iushowitz said. “They didn’t have much of a chance.” — Chicago Tribune

“Somewhere ahead of them [the Willis family] was Ricardo Guzman, who had paid a bribe to obtain a commercial driver’s license in Illinois. Guzman did not speak English and could not understand the other truckers who were warning him that a piece of his rig — a 30-pound bracket holding the truck’s mudflap in place — had broken loose.” — jsonline

The Willis children wrote a song, “On Their Way To Watetown” which speaks of the tragedy and have ventured into the area of music.

There was a large settlement from the state of Wisconsin due to political corruption which led to and allowed the truck driver being on the road without proper authorization.

“Rev. Scott Willis perhaps says it best, “Psalm 34 says, “I will bless the Lord at all times. His praise shall continually be in my mouth. Oh, taste and see that the Lord is good.” Janet and I want to praise and thank God. There is no question in our minds that God is good, and we praise Him in all things. God is a great God. ” — godupdates

• trials
• one of life’s hardest trials
• Job
• say not today or tomorrow we will do this-or-that
• It started out as a normal day . . . .
• tragic accidents

After listening to audio the testimony of Scott Willis:
• “It is enough — my son Joseph is alive and I will go and see him before I die” — listen to the message of Scott Willis for the connection
• Psalm 34
• memorizing Scripture
• God has prepared us for this day.

There are some tragic and disappointing turns and twists that are also part of the lives of the three oldest children and the grandchildren which are disheartening yet does not take away from Scott and Janet’s trial on I-94 on November 8, 1994.

3 thoughts on “Today’s Illustration: All Six Children Of Pastor Die In Crash”