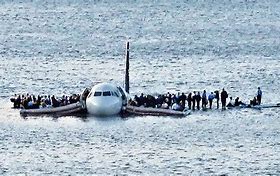 On This Day:  January 15, 2009 — “Described by the National Transportation Safety Board as “the most successful ditching in aviation history”, US Airways Flight 1549 was forced to make an exceptionally dramatic water landing in the Hudson River in New York after it struck a flock of geese following take off.”

Taking off from LaGuardia Airport, NYC

A flock of bird flew into the plane’s engines.

Both engines shut down.

Told to divert to the Teterboro airport

You can land runway 1 at Teterboro

Pilot: We’re going to be in the Hudson.”

Landed In the Hudson River, NYC

Weather: 20 degrees / water temp 36 degrees / hypothermia would set in in about 5-8 minutes – 35 people were rescued from the frigid waters / wind chill 11 degrees

Two pilots and three flight attendants on board

All passengers and crew survived.

Crash Was Nicknamed — “Miracle on the Hudson”

Sullenberger Called — “Hero of the Hudson”

“Some passengers say they had out-of-body experiences, others talked to God. The flight became an eternity for some, mere seconds for others. Some later thought they’d been airborne for a half-hour.

Tripp Harris, a banking consultant, went the other direction. He saw scenes from a future lost, playing catch with his 2-year-old son, helping him in school. “How badly I wanted to see him grow up.”

Inside the cabin, the passengers remained silent for five or 10 seconds after the jet came to a stop. In first-class Denise Lockie, an office-supply executive, remained braced in her seat until her seatmate, Mark Hood, an ex-Marine, nudged her.

“No, and I’m no angel,” Hood, a deeply religious man, replied as he urged her to get moving.

Nearby Barry Leonard started toward the door, then paused and looked back to make sure his body wasn’t still in his seat. — USA today

Jeff Kolodjay was in seat 22A, en route to South Carolina for a golf weekend with his father and cousins. He heard an explosion and saw fire in an engine under a wing as the craft circled over the Hudson River. At first, he says, “I thought by chance we’d make it back to LaGuardia and land.”

But then, “the captain said, ‘Brace for impact.’ Everyone started saying prayers, just kinda looking at each other, not knowing what to say or what to do,” he recalls. “How would you feel? ‘Brace for impact’ is not what you want to hear.” — USA Today crash

“TEMPE, Ariz. — US Airways Chief Executive Doug Parker got some of his first details about the jetliner that splashed into the Hudson River the same way most Americans did. On TV.

The airline boss told reporters at the company’s headquarters on Tuesday that he was in a meeting with his top finance people when the company’s chief lobbyist walked into the room, leaned down, and told Parker that one of their planes was in the river.

Parker hurried out of the room and found a TV. By then, the passengers were safely away from the plane. It was partially submerged and surrounded by boats, Parker said.

“I just assumed there were people inside,” he said. That led to a tortured few minutes when he thought that some of the passengers may have perished. ” — USAtoday30 travel

NEW YORK – The birds flew majestically, in perfect formation, and the co-pilot saw them coming.

For a moment, it looked like they would pass beneath US Airways Flight 1549, but when Capt. Chesley B. Sullenberger looked up, they were there in his windscreen. Big. Dark brown. Lots of them.

His first instinct was to duck.

Then there were thumps, a burning smell, and silence as both jet engines cut out.

For a moment, the Airbus A320 hung in the sky 3,000 feet above the Bronx, its engines knocked so completely dead that one flight attendant said it sounded like being in a library.

Investigators provided this dramatic new description Saturday of what unfolded on the flight in the five brief minutes between its takeoff from LaGuardia Airport on Thursday and its textbook splashdown in the Hudson River.

The plane had been in the air for only 90 seconds when disaster struck. Air traffic controllers hadn’t picked up the birds on their radar

screens and were still giving climbing instructions when the pilot radioed that something had gone very wrong.

“Aaah, this is Cactus 1549,” he said. “We lost thrust in both engines. We are turning back toward LaGuardia.”

But he announced a new destination within moments. LaGuardia was out. So was Teterboro Airport in New Jersey.

Sullenberger reasoned that his jet was “too low, too slow” and near too many tall buildings to reach any airport. And heading for Teterboro would mean risking a “catastrophic” crash in a populated neighborhood.

“We can’t do it,” he told air traffic control. “We’re gonna be in the Hudson.”

National Transportation Safety Board member Kitty Higgins recounted those radio transmissions and gave a detailed summary of Sullenberger’s testimony to the investigation team on Saturday. She also recounted the NTSB’s interview with the plane’s first officer, Jeff Skiles, and three flight attendants.

Their account illustrated how quickly things deteriorated during the flight, and laid out the split-second command decisions that ultimately ensured that everyone aboard the plane survived.

The flight was supposed to have been the last leg of a four-trip day. The crew had begun the day in Pittsburgh, flown to Charlotte, N.C., then to LaGuardia, and were to head back to Charlotte in the afternoon. They got departure clearance at 3:25 p.m., and a minute later the jet was 700 feet in the air, heading north.

The birds came out of nowhere, Higgins said. They hadn’t been on the radar screen of the air traffic controller who approved the departure, although other radar facilities later confirmed that their path intersected the jet as it climbed past 2,900 feet.

Back in the cabin, the passengers instantly knew something was wrong. They heard a thump, then eerie silence. A haze hung in the air. The flight attendants smelled something metallic burning.

“I think we hit a bird,” said a passenger in first class.

In the cockpit, Sullenberger took over flying from Skiles, who had handled the takeoff, but had less experience in the Airbus.

“Your aircraft,” the co-pilot said.

While the pilot quickly leveled the plane off to keep it from stalling and thought about where to land, Skiles kept trying to restart the engines. He also began working through a three-page list of procedures for an emergency landing. Normally, those procedures begin at 35,000 feet. This time, he started at 3,000.

Sullenberger made a sweeping left turn and took the gliding jet over the George Washington Bridge, and scanned the river, his best bet.

Pilots are trained to set down near a ship if they ditch, so they can be rescued before they drown or freeze to death in frigid seas. Sullenberger picked the perfect spot. The channel was 50 feet deep and clear of obstructions, but only minutes by boat from Manhattan’s commuter ferry terminals.

It happened so fast, the pilots never had time to throw the aircraft’s “ditch switch,” which seals off vents and holes in the fuselage to make it more seaworthy.

Sullenberger issued a command over the intercom, “Brace for impact.” Only 3 1/2 minutes had elapsed since the bird strike.

“Brace! Brace! Head down!” the flight attendants shouted to the passengers.

Security cameras on a Manhattan pier captured the spectacular landing. The jet came in easy, like it was coming down on land, and threw up spray as it slid on its belly.

Two flight attendants likened it to a hard landing — nothing more. There was one impact, no bounce, then a gradual deceleration.

“Neither one of them realized that they were in the water,” Higgins said.

That changed quickly. The crew got two doors open. One water slide deployed automatically. The other had to be activated by hand. Passengers grabbed life preservers and seat cushions.

At the rear of the plane, a third flight attendant stopped a passenger from opening a rear door and letting in a gush of water, then made her way forward.

As the passengers made their way out onto the wings, she started to feel woozy. Only then did she notice that her leg had a severe cut — the most serious wound to anyone on board.

He hadn’t spoken to reporters yet on Saturday, but Higgins said, “He could not be more happy that he got everyone off the airplane safely.”

On Dec. 20, a Continental Airlines plane veered off a runway and slid into a snowy field at the Denver airport, injuring 38 people. That was the first major crash of a commercial airliner in the United States since Aug. 27, 2006, when 49 people were killed after a Comair jetliner mistakenly took off from the wrong runway in Lexington, Ky.”  — nbcnews