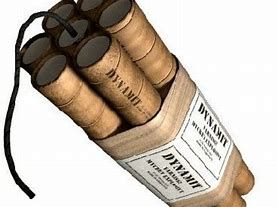 This very difficult to make explosive was discovered by Ascanio Sobrero.  It was and is difficult to make because you could easily blow yourself up by and while making it.  The slightest bump during transportation, a rapid change in air temperature, or long exposure to sunlight could trigger an explosion.

From the movement of car pistons, fireworks, mining, gunpowder stuffed cannons, rockets, guns, cap pistols, to the splitting of the atom, all are designed around the ability to create an explosion, a controlled explosion.

An Expolsion:  Cause by suddenly and rapidly expanding air.  The faster the air or gas tries to expand, the greater the explosion.

Gunpowder was on the top of explosive compounds for 500 years until the 1800’s when “guncotton” and “nitroglycerine” were invented.

It was easily detonated, but that is also what made it hard to detonate in a controlled situation.  Because nitroglycerine was so unstable, at times it was believed that there was no way to control it in order to make it useful.

Keeping it very cold limits the chances of detonation.

The transportation of nitroglycerine was outlawed for some time because of the unstable nature of the substance.  At that time, the substance was made on site.

Nitroglycerine is one of the most explosive elements in the world today.

It is the actual explosive element in what is typically called dynamite.

In a solid form, it is very stable — i.e., a heart medication

The medical use of nitroglycerine was discovered during “the mass manufacturing of dynamite. It was during that process that factory workers noticed a strange thing. Whenever they came into the factories, those with pains in their chest felt those pains subside. . . . Nitric oxide is a kind of muscle relaxant, and the body is filled with muscles. Even blood vessels are surrounded by muscles, and when these muscles flex, they constrict the vessels enough that either less blood reaches its destination or the heart works harder, or both. Nitric oxide makes those muscles relax, and lets blood flow easily through the body. And there is no bang involved.” — heart medicine

Sobrero believed the best way to detonate it was by introducing a hot wire into a glass bowl filled with the substance (he was scarred for life by the flying glass).

“. . . . Alfred Nobel and his family were explosives manufacturers in need of money. They took the risk of trying to manufacture nitroglycerine, but they had an awful lot to learn. In their first year of manufacture, their factory in Sweden exploded, killing Alfred’s younger brother Emil. . . . . Nobel built what were called nitroglycerine hills. Nitroglycerine was made in little huts on the top of each hill. In each hut were two men, one to monitor the mixing reaction, the other to adjust the flow of water through a cooling jacket to keep the temperature in the right range. Now, vigilance was vital. The entire batch could self-detonate if allowed to go out of control. For this reason, one man had to always sit on a one-legged stool, so there was no chance of him falling asleep on the job. I mean, as if sitting next to a vat of nitroglycerine was not stimulation enough! Nitroglycerine could not be safely pumped. So what they did was just let it flow under gravity from the huts at the top of the hill to the factories at the bottom. Once inside the factory, it got stabilised.

Now, this was what was Nobel’s great achievement. He discovered that if he mixed his nitroglycerine with an absorbent clay, a bit like cat litter, it became a lot less sensitive, a lot easier to handle without going off in your hands. The clay he used came as a fine powder called kieselguhr. Once mixed together, a dough-like substance was formed. In fact, it was kneaded by armies of women into the shapes required. This new compound was called dynamite and it was a revolution. Now there was a high explosive that was insensitive to shock and heating. You could actually set fire to it and it would burn with a normal flame. I don’t recommend it, but apparently you could, but once you’ve made something that’s this good, that’s this stable, this difficult to set off, how do you get it to explode when you want it to? That was Nobel’s other great innovation. And they actually still make those devices at his old factory. In fact, Nobel’s sand bunkers are the perfect place for me to find out more about them. Well, Alfred Nobel being the very inventive guy that he was, came up with the idea of a detonator and this is a modern detonator, but the basic principle is a device which delivers an explosive shock to dynamite and that shock is sufficient to detonate it. . . . .

Nobel’s struggle to tame the power of high explosives and make them safe tools for the hungry industrial world made him a very rich man. By safely harnessing the shattering power of nitroglycerine’s detonation with dynamite and a range of other compounds, a new era of civil engineering opened up and great construction projects such as the Suez Canal, the London Underground system and then the Panama Canal could now be undertaken. And that might have been Nobel’s legacy, if it weren’t for a mistake that occurred in 1888. After the death of Alfred Nobel’s elder brother Ludvig, some newspapers mistakenly printed Alfred Nobel’s obituary instead. Where he was living in France at the time, Le Figaro printed this small but damning paragraph. It translates as, “A man who it would be difficult “to describe as a benefactor to humanity died yesterday in Cannes.” Now, reading that must have been a bit of a shock, and it’s said that it made Nobel intent on changing his legacy to the world. To that end, he left his vast fortune to setting up a foundation which would award prizes for literature, science and peace. Nobel’s advances in explosive design were the result of long hours and hard work, but some revolutions in the history of explosives are sparked simply by a chance observation.” — “How We Shook the World.”

One of the greatest accidents caused by the use of nitroglycerine was in the building of the Central Pacific Railroad.

A Medication:
“NITROGLYCERIN is a type of vasodilator. It relaxes blood vessels, increasing the blood and oxygen supply to your heart. This medicine is used to relieve chest pain caused by angina that does not respond to oral treatment. It is also used to control blood pressure in the surgery setting and to help treat congestive heart failure after a heart attack.” — wikipedia

A Liquid Explosive: It is an unstable liquid compound which at the slightest jolt, impact or friction can cause an explosion

• dynamite!
• power
• control determines usefulness
• a mistaken obituary
• what do you want to be known for at the end of life
• understanding the process comes before controlling it
• explosive words / actions / people / events
• for good and for evil
• controlling forces that can shake the world
• channeling explosive forces
• “How We Shook The World” [Documentary on Explosions by the BBC in 2010]
• amazing destructive power
• blowing up a church
• to cure and to kill
• one of the most explosive elements in the world today
• you can blow yourself up
• unstable
• it takes only a bump in the road
• power under control
• power with little control

“Engineer Jem Stansfield visited the Defense Academy of the UK and attempted to show us on film. He took a drop of nitroglycerin and then hit it with a hammer. The explosion was so fast it’s difficult to see even when the footage is slowed down 600x.” — geek