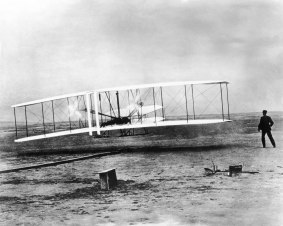 In an interesting book written about the early years of the invention of the airplane, Jay Spenser makes an interesting observation as to why the Wright brothers were the ones to solve the problem of sustained flight by a heavier-than-air ﬂying machine.

“Viewing this pro-airplane [the 1903 airplane in the Smithsonian], now more than a century old, one might well wonder how two brothers from Ohio came to solve the horrendous unknowns of ﬂight.

How did they conjure into being, whole and working, something that had never before existed on the face of the earth?

Traditional explanations have it that the Wrights succeeded through sheer pluck, determination, and good old American know-how.

This unhelpful answer, the product of mythmaking by a proud nation, provides no insights. Worse still, it falsely implies that the airplane could not have been invented anywhere but in the United States.

It should be noted — it was not that other forms of “flight” were not attempted and even in operation — hot air balloons, various gliders, and even manned kites — but not fixed wing heavier than air flight.

“To qualify as an airplane, a machine must be manned, powered, heavier than air, capable of taking off under its own power and ﬂying out of ground effect (not just skimming low, buoyed by a cushion of air against the ground), and controllable around all three axes.”

How was it that two brothers who operated a bicycle shop in Ohio came up with the solution to sustained flight?

Then how did the Wrights change the world on the sands of Kitty Hawk?

The answer has two parts, the ﬁrst being the immediate human tale as told in this chapter.

The second, the technology side of the story, is sprinkled among this book’s subsequent chapters, each of which examines a different aspect of ﬂight technology.

What did the Wright Brothers understand that others who were  . . . .

did not understand or grasp?

In Jay Spenser’s book — “The Airplane: How Ideas Gave Us Wings,”  Spenser answers that question . . . .

#1) The profuse publication of the “Henson Aerial Steam Carriage illustration” caused inventors to think in light of the analogy of the horse-drawn carriage. 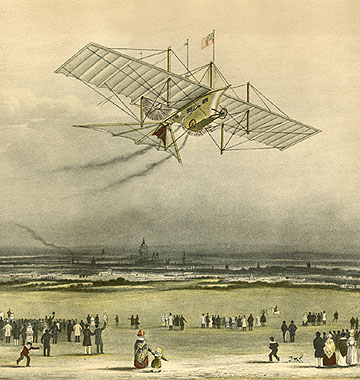 This illustration, created by Henson, mistakenly focused others to visualized the airplane as a flying carriage.

“First published in the early 1840s, the engraved illustrations of the Henson Aerial Steam Carriage [William Samuel Henson] continued to appear off and on in newspapers, magazines, and books for more than a half century.  More thrilling artwork of heavier-than-air ﬂying machines was hard to imagine, and the very sight of this aerial stagecoach spurred Europe’s aerial experimenters to redouble their efforts.”

“Unfortunately, however, it also handed them a lot of incorrect notions. The concept of an aerial carriage brought with it a concomitant expectation that people would drive airplanes around the sky making ﬂat turns as they did in horse-drawn vehicles. This unquestioned assumption shaped how France’s early experimenters approached airplane design, and it cost them dearly.”

#2) The inventors who successfully worked on the design of the first airplane understood the two axes: up-down=pitch / left-right=yaw.  Any aerial carriage must be able to raise its nose and move forward, and point its nose left and right.  However, they did not understand the third axis that operates with an “aerial carriage” — roll.

But carriages don’t tilt [roll] sideways, or at least not very far, because that leads to a catastrophic upset. Henson’s vision told Europe’s early experimenters that their airplanes must not be permitted to tilt side to side or else catastrophe would ensue.

To ensure that this never happened, some experimenters used strongly upward-angled wings (Cayley’s idea of dihedral) so that the airplane would be self-righting in ﬂight. Others placed vertical fore-and-aft fabric panels between the wings of their biplanes to prevent sideslips.

Both these features suggest that Europe’s pioneers were terriﬁed of banking, or dropping a wing in ﬂight.”

Those designing airplanes built in what we call rotational stability, making sure that the wings of the aircraft did not tilt easily (today known as “roll”) — no less suddenly roll.  Their aim was to keep the wings level — never dropping on either side while in flight.

In fact, as Spenser states, some even built box-like structures on the wings, like square kits, to prevent the wings from tilting and at least helping them not want to tilt. 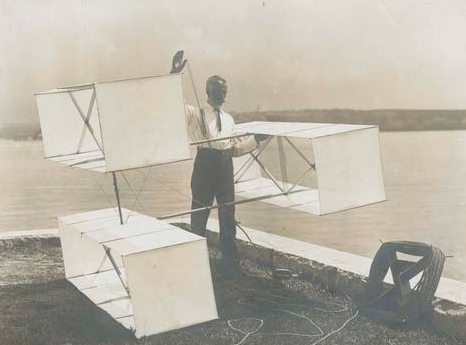 Wilbur and Orville worked under a different mind-set. They too had seen Henson’s artwork, but it didn’t sing to them because they were bicyclists. Their intimate association with this vehicle, its operation, and its manufacture led them to approach ﬂight development in a different way than their European counterparts.

Wilbur and Orville were not in the least scared of tilting to one side or the other in ﬂight.

Banking in ﬂight seemed natural to them because a bicyclist leans into turns.

What’s more, they understood from the outset that the airplane needed to be controllable around all three axes [today known as: yaw – pitch-roll] and that the pilot had to be intimately involved with this process while aloft.

These two insights were intuitive because the bicyclist must constantly direct his two-wheeled vehicle by means of a combination of active balance and coordinated use of handlebars, acceleration, and braking.  If the bicyclist doesn’t stay on top of these things every minute, he’s in for a spill.

What the Wright brothers understood was that an airplane must tilt-roll in order to turn left or right. Today, the pilot “warps the wings” by changing the shape of both wings with ailerons — and thereby change the lift or lost lift of each wing — as they make their turn.

The Wright brothers understood that turning an airplane is not merely a matter of pointing the nose left or right, but dipping/raising the wings – just as we do our shoulder on a bicycle!

It seems funny to think anyone ever thought otherwise. But on the eve of the twentieth century, people simply did not know. Although bird ﬂight certainly suggested the truth, wrong paradigms—such as Henson’s idea ﬁxed of an aerial carriage—have tremendous power to blind people to the obvious.

Wrong paradigms have tremendous power to blind people to the obvious!

That not only happens in the world of flight, invention, or engineering, but it also happens in life and living — even in Christian living!

It happens when it comes to the wrong paradigms which come from . . . .

The difference was that the Wright Brothers were more bicyclists than “horse n’ carriage” riders in mind.

Some Suggested Application Ideas To Run With:

√ Every so often the “Wright Brothers” come along and see it from a different perspective — because they are “bicyclists,” not carriage rider theorists.

√ For the Christian, there is a third dimension you need to take into account.

√ It is as preachers and pastors live in the real world, mix with real people, that they see and understand Christian life and living from a different perspective.

√ It is as God’s people see life differently from those who think like the rest of the world, that they will live differently.

√ The local church often has leaders who can only see in light of their background and thinking, and never get off the ground to what could be far more effective.