One of the most confusing — maybe not confusing, but clearly ironical — is the unawareness of critical theoretical concepts which impact homiletics.

The unawareness of such foundational concepts is ironic because classical rhetorical theory is founded on the recognition by such men as Aristotle that there are three areas of life which rely on the ability to communicate — politics / law / and “religion.”

Classical rhetorical theory was seen as intricately related to the propagation of religion, as much as it was justice and social change!  Yes — they believed that justice and social change was reliant on effectively communicating to an audience — whether it be communicating to a judge or jury of your peers, or a society who could be persuaded to follow certain cultural norms for governing themselves.

However, such rhetorical theory was similarly and equally seen as a means of propagating “religion.”  Developing one’s communication skills and ability was not seen as foreign to “preaching,” but intricately related to the presentation of spiritual truths.  That is why “homiletics” is part of a seminary education because it is designed to further one’s rhetorical skills.

However, “homiletics” has for all practical purposes been uncoupled from classical rhetorical theory.  The proof of that is seen not only in the scarcity of classical rhetorical concepts (and even absence) presented in homiletics classes, the absence of discussion of such concepts in most books and articles on homiletics, and the almost total neglect of one of the most foundational concepts called “topoi.”

Some of the neglect and/or unawareness of the classical tradition comes from an all too common held opinion that “rhetoric” is at odds with preaching.  That “rhetoric” or “persuasion” is not what “preachers” have been called to do.  “Rhetoric” is a word that speaks about deceit, bypassing reason, stirring up passions, flattery, and/or dazzling an audience with one’s eloquence, or even chicanery.

Preachers have not been called to “persuade” but to just lay out the truths of Scripture!

Another reason to classical rhetorical theory is absent in many presentations, and discussion of homiletics is because there is a disconnect between what preachers actually do, whether they like the word “rhetoric” / “persuade” — or not.

• just read the biblical text to the audience!

• explain what the words of the text mean — sometimes called “expository preaching” — but mistakenly called that!

• pass out a copy of their “manuscript” to be read as he talk or later.

• provide the application of what the passage teachers — in fact that is where some of the greatest failures occur.

• offer a sterile presentation of what the passage and words mean.

Preachers seek to persuade an audience to live out what the Scriptures teach!

That is why preachers sound different!

And why some are more effective!

That is why speakers and preachers are great-to-good-to-okay-to-boring and the reality is that audiences recognize effectiveness!

Preachers are not potted plants!  They are there to INFLUENCE — if you do not like the word “PERSUADE,” “influence” works.

Stephen, James, Peter, Paul were intent on “persuading” and were so persuasive that they ended up in some very difficult situations while preaching — because they were effective!

They were not just “laying out the truth” — that they were — but they were doing that and more! They were driving home what those truths meant in real terms in order to cause either belief or unresolved conviction!

are all classical notions, and understanding them was part of the development one’s public speaking skills then, and today.

But only teaching such basics — as found in the standard Speech 101 class — fails to do justice to some and one of the most foundational classical rhetorical concepts.  These basics they pale in comparison to an understanding of the central concept called “inventio” and its supervisory employee called “topoi” — the “topics.”

It should be noted that the cannon called “memory” / “memoria” was intertwined with “invention” / “inventio”.

• “Memoria” / “memory” has nothing — absolutely nothing — to do with memorizing a speech.

• “Inventio” / “invention  has nothing to do with “inventing” something out of “thin air” – fabricating some untruth — something which is not really there.

“Invention” speaks about the creativity side of public speaking.  What should I include and/or leave out to make it clear and persuasive?  What examples, illustrations, arguments, ways of saying it, wording, vocal emphasis should I employ to drive home the point? How do I put this together so that it is most effective?

“Memory” has to do with retaining “topoi” for later use!  “Memoria” is the practical side of “inventio” / “invention.”  The classical theorist understood that it was vital for an effective speaker to continually build a mental library of arguments, ideas, ways of developing a truth or argument, means of arguing, and the like if one were to be effective on their feet!  That ability is exactly what happens to seasoned preachers and speakers — they are able to speak out of an “overflow” of years of experience and knowledge.

“Invention,” “memory,” and “topoi” are all connected.

“Topoi” (plural) or “topos” (singular) would be translated in English to “place or places.”  There are four kinds of “places” in the classical theorists’ minds . . . .

#1) Common places:  Cultural or societal beliefs that are held by the group you are speaking to and seeking to persuade.

“Your rights end where my nose begins.” — “Hea there, go to the back of the line, You have no right to jump in front of me in line.”  — You can do what you want, but you can’t do what affects me and my life.

“Self control” — The way I dress does not give you the right to say that I was partially responsible for your actions!  — We have an obligation to control our own actions and behavior and not blame it on another.

#2) Special Places:  Most, if not all, fields of endeavor have their own special topoi.   Beliefs which are held which are generally “unique” to that realm of study or interest.

Law: Liability (You can pick this up quickly from Judge Milian – People’s Court):  Did you do something that caused the situation, which could have been avoided if you had acted differently

Medicine:  Hypocratic Oath — Do all you can to save a life

“Religion”:  Love Others As Yourself — The parable of the  good Samaritan

#3) Argumentative Places:  Different kinds of arguments which can be used to persuade and influence.

Examples . . . . (The first two are ones we would be aware of in Scripture or apologetics)

Causality: The fruit is not the cause, the root is.

#4) Mental Storage Boxes:  I call it “a mental storage box” because the box includes ideas, arguments, ways of saying something, vocal emphases, stylistic method, points, truths, principles, examples, stories-illustrations, quotes, perspectives, etc. — all which have been stowed away

James was the brother of Jesus and was convinced that Jesus was God.  How many of you would be convinced if your brother claimed that he as God?

Creating a notebook — mental or actual — of various “topoi” is invaluable to the person who spends his/her life in public speaking!

How do you develop such a “notebook?”

First of all, you begin hearing them used by others who are effective communicators — like the one I cited for Trey Gowdy.

We cannot only think, but we can also think about our thoughts!  As you see and hear effective communicators, you can think about what he/she just did that made them effective.

Second, check out the many free posts.  Part of our purpose is to give examples of various topoi and examples of effective techniques from mostly contemporary preachers.  There are hundreds of pages of information which we post to connect classical rhetorical theory with homiletics.

Third, begin a notebook which has this kind of information in it (not just a notebook of illustrations — thought that works as well)  — but examples from speakers which catche your mind in an analytical sense — which can help your creativity as you study and preach.

Fourth, commit what you can to “memory” (not rote memory, but like after hearing Trey Gowdy you remember that interesting division of the political problem he is speaking to) so that as you work on a speech or message, your mind calls up this-or-that idea, argument, approach, technique, structure, etc. — and which may have been on a totally different passage!

You should be able to listen to speakers which are not speaking on what you are speaking about — not even close to your passage or  message — but as you listen your mind creatively adapts the information, arguments, techniques, approach, method, topoi, way of thinking-seeing, illustrating, developing, structuring, explaining, comparing, clarifying . . . . .

As I was looking for a graphic to head this post and googled “foundation,” I saw this book graphic . . . . 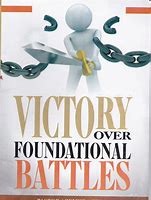 Wow — there is an idea I need to hold in mind / remember / memoria — “Foundational Battles” — I can use it in other speaking situations.  I have no idea what the book says, but I thought . . . .

“Foundational Battles are different than the battle with . . . . .”

“What would you deem as a ‘Foundational Battle’ versus a non-foundational battle . . . . What would be the criteria?  Is it different for different people, or does every believer face basic battles in their Christian lives? “

Many / most Americans never face some foundational battles because of their affluence — ?

2 thoughts on “Rhetoric & Homiletics: One Of The Most Critical Concepts To Get Under Your Belt!”