Who Packed Your Parachute?

Parachutes actually go back to Leonardo Da Vinci . . . . “If a man has a structure made out of coated cloth 12 arms wide and 12 tall, he will be able to throw himself from any great height without hurting himself.”

For once you have tasted flight you will walk the Earth with your eyes turned skyward, for there you have been and there you long to return.

They were called — “Ariel Life Preservers”
We know them as “parachutes” — Para + Chute:  “against” + “fall”

“A parachute is a device used to slow the motion of an object through an atmosphere by creating drag. Parachutes are usually made out of light, strong fabric, originally silk, now most commonly nylon. They are typically dome-shaped, but vary, with rectangles, inverted domes, and others. A variety of loads are attached to parachutes, including people, food, equipment, space capsules, and bombs.”

1785 — Jean-Pierre Blanchard – Inventor of the first “Animal Parachute.”  Blanchard dropped a dog, which was fitted with a rigid framed parachute, from a hot air balloon.

1793 — Jean-Pierre Blanchard claims to have invented and used the first all fabric — silk —  parachute.

1797 — Andrew Garnerin is the first person who officially recorded a parachute jump.  He jumped out of a hot air balloon — 8,000 feet in altitude — made of canvas.  Someone suggest to Garnerin that he cut a slit in the canopy to lessen the oscillations of the parachute and he did.  That slit was later added to his design.

1914 — By the 1900’s a variety of different individuals designed their own parachutes.

However, it was not until 1914 that the firsts freefall jump by Georgia Broadwick caused the skeptics to realize that the parachute could be designed and used to save the lives of balloonist and flyers.

“Georgia Broadwick was born, Georgia Ann Thompson, in North Carolina on April 8, 1893.  She took on the name of “Broadwick” when she joined the “Broadwicks Famous French Aeronauts” Team.

Georgia “Tiny” Broadwick — was 5 feet tall and weighed only 80-85 lbs. and became a renowned performing parachute jumper.  At the age of 15, she jumped out of a hot air balloon at the North Caroline State Fair.

“The Broadwicks and their Famous French Aeronauts” traveled across American with  Georgia being the drawing performer of the show.

In 1914 she demonstrated to the U.S. Army the use of the parachute.  She made four jumps.  The last attempt was foiled because her static line became entangled with the tail of the small aircraft.  She decided to cut off the static line and decided to deploy the chute manually.  She is credited with inventing the “ripcord” which gave the individual the ability to decide when to have the parachute deploy.

awarded the U.S. Government Pioneer Aviation award
awarded the John Glenn Medal
the Gold Wings of the Adventurer’s Club
made a member of the Early Birds of Aviation
made an honorary member of the 82ndAirborne Division at Ft. Bragg
appeared on You Bet Your Life, to Tell the Truth, and Mysteries at the Museum.

In the book, “Tiny Broadwick: The First Lady of Parachuting, by Elizabeth Roberson, Roberson stated:

“this book is the record of a remarkable woman, one who bravery and fearlessness paved the way for so many others who have followed.  She made flying much safer for the thousands of pilots of World War I until the present.”

In 1964, Georgia Broadwick donated the handmade parachute, consisting of 110 yards of silk, to the Smithsonian’s National Air Museum

At the May 5, 1964 Tiny Broadwick Night dinner during which Tiny donated her parachute, National Air Museum Director Philip S. Hopkins said, “Measured in feet and inches, her nickname ‘Tiny’ is obviously appropriate.  Measured by her courage and by her accomplishments, she stands tall among her many colleagues — the pioneers of flight. And her contributions to flight history have helped to make America stand tall as the nation which gave wings to the world.”

“But no matter what slice of time during which humans roamed the earth that you investigate, you will find examples of the strong determination and curiosity that characterize the human spirit. This is the essence of development: constantly pushing boundaries and seeing limits as suggestions or even as challenges to overcome. ” — firstskydivelosangeles

Today, parachutes are just a common and ordinary apparatus in our thinking.  Parachutes evolved and developed into all kinds of alternative designs. 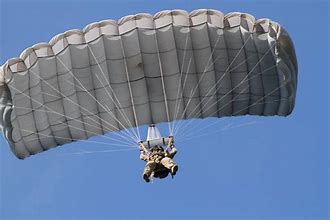 The parachute has even made “Sky Diving” possible!

• risk
• ripcord
• bravery
• fearlessness
• made it safer
• pioneer
• Tiny
• aerial life preservers
• parachute
• courage
• it takes people who will
• progress
• inventions
• fearful while taking far less risk
• being the first in/on the field
• missions / missionaries
• small but big
• “measured by her accomplishments”
• “measured by her courage”
• cut the “static line” in life
• making a difference
• “You Bet Your Life”
• spiritual sky diving
• looking for excitement
• putting your life into the hands of the packer
• trust
• trusting that it will land you safely
• you may never meet the person who packed your parachute
• who packed your parachute
• it separates us from life and death
• Pack your own parachute!
• whose parachute are you packing

Who Packed Your Parachute – pdf story

The First Parachute and the Birth of Modern Skydiving

The First Skydive Over Los Angeles

Who Packed My Parachute?