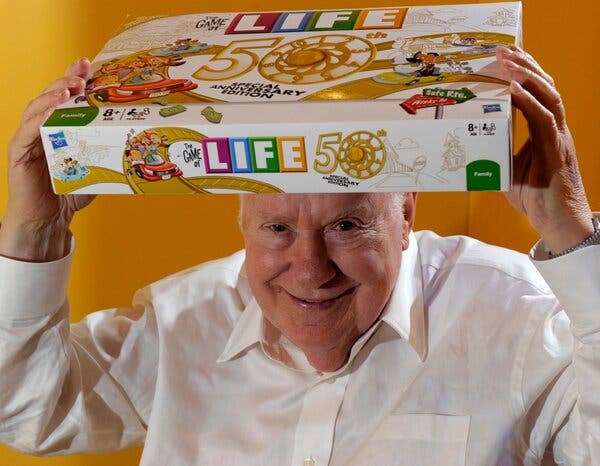 What:  “The Game of Life” board game

It was a hit at the 1960 Toy Fair in New York and was soon translated into other languages. At one point, Jonathan Klamer said, it ranked second only to Monopoly in worldwide popularity.

By now, he added, the Game of Life has sold as estimated 70 million copies in 59 countries and has been the best-selling board game in Japan for more than 50 years. In the United States, it became such a part of the culture that it was inducted into the permanent Archives of Family Life at the Smithsonian Institution in 1981.”

“The Warehouse of Broken Dreams

I was visiting Reuben at his home when he asked me if I would like to visit his warehouse. When we arrived I was astonished by its size and the number of inventions it held. Reuben turned to me and he said, “It’s my warehouse of broken dreams. It contains every toy I invented that failed.” Here was a man who had over 200 toys make it to market yet he had thousands that never made it. I found Reuben’s words to be a profound statement about how many failures it takes to be successful. It also speaks to Reuben’s sense of humor and humility when reflecting on his success.”  — RICHARD GOTTLIEB

“Jill Lepore wrote in The New Yorker in 2007, the redesign teams always had a hard time addressing the fundamental criticism of the game — that the only way to reward a player for virtuous acts was with money: “Save an Endangered Species: Collect $200,000. Solution to Pollution: $250,000. Open Health-Food Chain: $100,000.”

And so the company’s 2007 overhaul, the Game of Life: Twists & Turns, was almost existential. Instead of putting players on a fixed path, it provided multiple ways to start out in life — but nowhere to finish. “This is actually the game’s selling point; it has no goal,” Ms. Lepore wrote. “Life is … aimless.”

“What is the goal of Life? To accumulate the most money.

That’s what I learned from reading the obituary of Reuben Klamer, the creator of the board game, The Game of Life, who died this week at 99.

When The Game of Life was introduced, in 1960, the purpose was to earn the most wealth. The way you got there was simple enough—by going to college, getting a job, buying insurance, saving for retirement. That was “indicative of what sold in that era,” a former Hasbro VP told the NYT.

“Over time, designers realized that the game didn’t reflect consumers’ changing views of #lifegoals. So they gave it a big update in 2007, allowing players to score points for virtuous deeds like saving an endangered species, opening a health-food chain, and recycling. And instead of starting the game at point A and finishing at point Z, there is no fixed path: You decide how you want to spend your time.”

With The Game of Life, you were issued a little plastic car and you drove the road of life getting married and acquiring kids.

I don’t remember if the game had divorce.

That would be a wrong turn on the road of life.

Or maybe a right turn.

The kids were represented by pink or blue sticks, and I think you needed a husband stick and a wife stick to acquire the kid sticks.

You could not be two wife sticks or two husband sticks.

Or a single wife stick or a single husband stick.

It was a different time.

Bottom line, we were stuck.

You drove past green plastic mountains, which served no function and made it hard to fold the board. But never mind, it was a great time, and I can’t even remember why but I loved it.