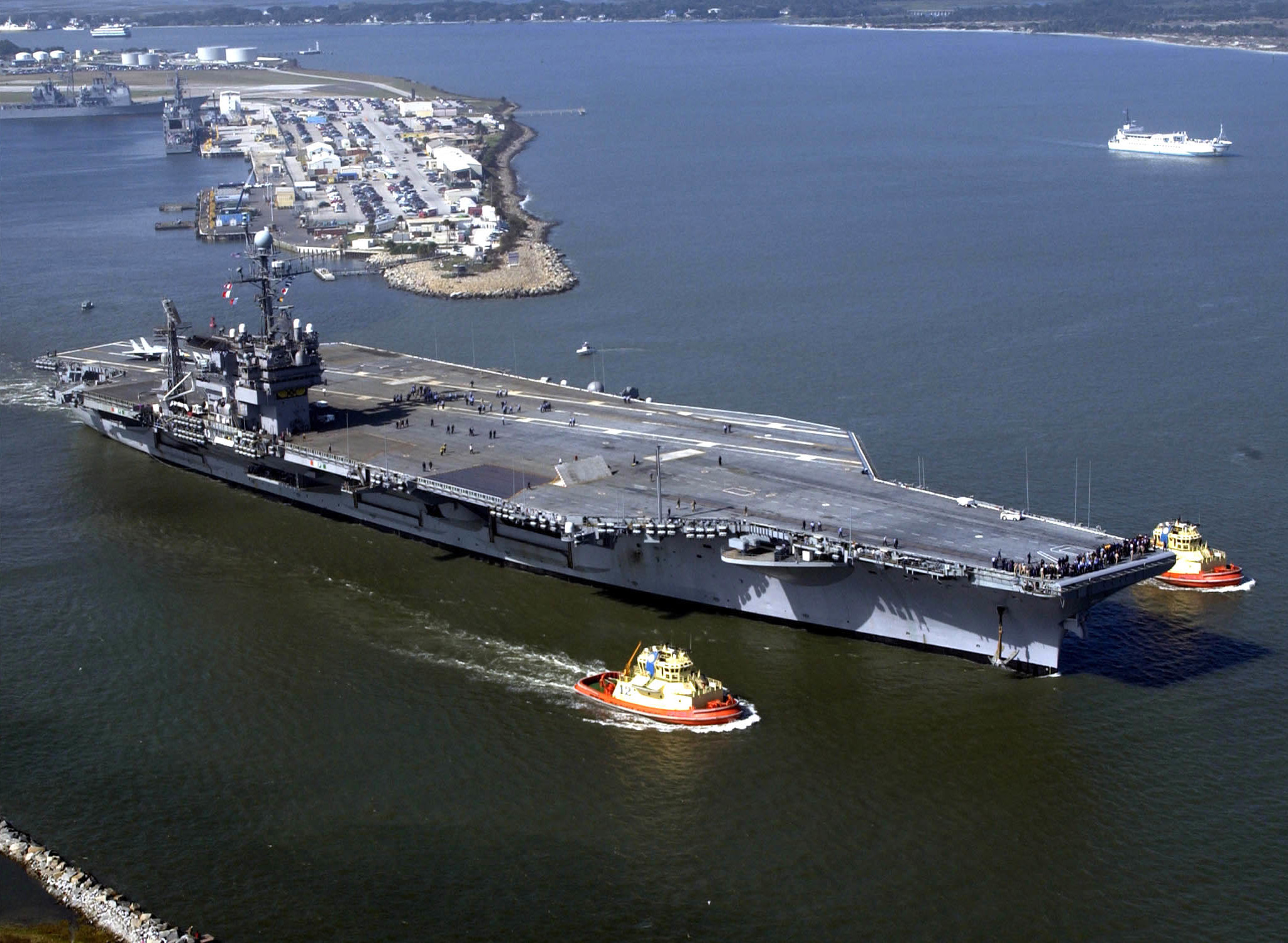 What: An emergency stop test of the aircraft carrier USS JFK [2]

“An object in motion tends to stay in motion.”  That is Newton’s first law of motion.  Once something gets moving, it wants to stay moving.  When it comes to an aircraft carrier, the ship will stay in motion for about five miles — that is the distance from here to ______ — before it coasts to a stop.

The ship can be stopped a lot faster, but it takes a lot of skill to accomplish that in an emergency.  It can be done in a couple of ship lengths by a “full-reverse” of the props, but the water around the props begins to boil, and the generated shock waves can accomplish a lot of damage to the machinery in the engine compartment.

Here is what Paul Montgomery says about that experience . . . .

Likewise, some sins and sinful situations are hard to stop as they play out in life.  As one tries to manage the by-products of that sin, midst the terrible accompanying decisions.

Like David, he sought to manage his sin with Bathsheba — hoping he could coast the ship to a stop, and then finally David had Uriah killed in battle. Be assured, there were loud protests of the Spirit as to how wrong that decision was.

1. The static pressure falls below the vapor pressure.  That is why bubbles form when you heat water, and those bubbles then collapse and produce steam vapor.  However, when this propeller phenomenon happens, bubbles and steam vapor are created due to the rapid movement of water, and vapor-filled cavities or voids are formed. Their collapse generates shock waves that can and do damage machinery.
— https://dmsonline.us/bubbles-are-bad-the-cause-and-effects-of-propeller-cavitation/

I was present for an emergency stop test in the engine room of the JFK back in the early 80s. I have first-hand knowledge of doing this. . . . Please fasten your seat belts.

A ship has no brakes. Normally it coasts to a stop.

This takes about five miles for a carrier at full speed as someone else alluded to in another answer.

You can do this in a car coming to a red light if you want to. It will irritate the other drivers, but who cares right?

Now imagine a car with no brakes. You coast to a stop just like ships do.

Everything is fine until some guy ruins your day by pulling out in front of you.

What do you do, You have no brakes?

YOU CRAM IT INTO REVERSE AND STEP ON THE GAS.

In cars, that would likely break something even if you have a straight shift, but you can do it if you are:

I can hear the comments now. Impossible.

I’ll refrain from giving the details of when, where and why I did this. I am not sure what the statute of limitations is.

On an aircraft carrier, you are doing just that when you do an emergency stop. In the engine room, things are absolutely screaming in protest.

And it does not take miles to stop.
It happens in a few ship lengths.
Remember, a mile is only five lengths of a US aircraft carrier.

Yes, it is intense.

We did this without any equipment on the flight deck. No planes. No green, red, yellow, white, blue, brown, or purple shirted guys running around. Everything tied down tight.

The night I reported to the ship it was dark and rainy. I walked up to the watch at the pier and showed my orders. He pointed toward this dark shadow. I was confused.

“Is the ship behind that warehouse?” I asked.

He laughed and said, “That warehouse is the ship”

You really can’t appreciate the size of a US Carrier until you walk up and get swallowed by it.