“Three decades later, “American Pie” remains one of the most debated and dissected songs in the history of popular music. . . . ‘American Pie’ was no ordinary song – at eight and a half minutes long, it quickly became a cultural event and even though many people weren’t entirely sure what it was about, it reached the top of the Billboard 100 charts in a matter of weeks and sold over 3 million copies.  Don McLean had refused to discuss the meaning of the lyrics for decades but finally cracked the code in a 2015 interview that preceded the auction for the original manuscript of the iconic song.

“American Pie” was written and performed by Don McLean.

McLean’s father died when he was 15 years old.

McLean bought his first guitar when he was 16.

He attended Villanova University and dropped out after four months.

His first album was called “Tapestry,” which was submitted and rejected by over 70 record companies and finally accepted in October 1970.

“American Pie” was McLean’s second album which catapulted him to an overnight success.

The original song run 8:33 — one of the longest popular hits of the time — fourth longest of all time highlighted by Billboard Hot 100.

It was McLean’s most popular and lucrative release.

In 1978 McLean indicated that it the song had an autobiographical message.

The song speaks of a period of time which covers 1959 to 1970 — which was a period of national disillusionment about whether this world could ever be changed for the better.

The 1950’s was a period of prosperity and optimism after WWII.

“It (American Pie) was an indescribable photograph of America that I tried to capture in words and music. . . . .People ask me if I left the lyrics open to ambiguity . . . Of course I did. I wanted to make a whole series of complex statements. The lyrics had to do with the state of society at the time. . . .Basically in ‘American Pie,’ things are heading in the wrong direction — It is becoming less idyllic. I don’t know whether you consider that wrong or right but it is a morality song in a sense.”” — McLean reported in the Washington Post

The song then moves on to the death of singer Buddy Holly — in an airplane crash February 3, 1959 — which occurred thirteen years prior to the writing of the song — which killed three singers along with the pilot — “the day music died.” 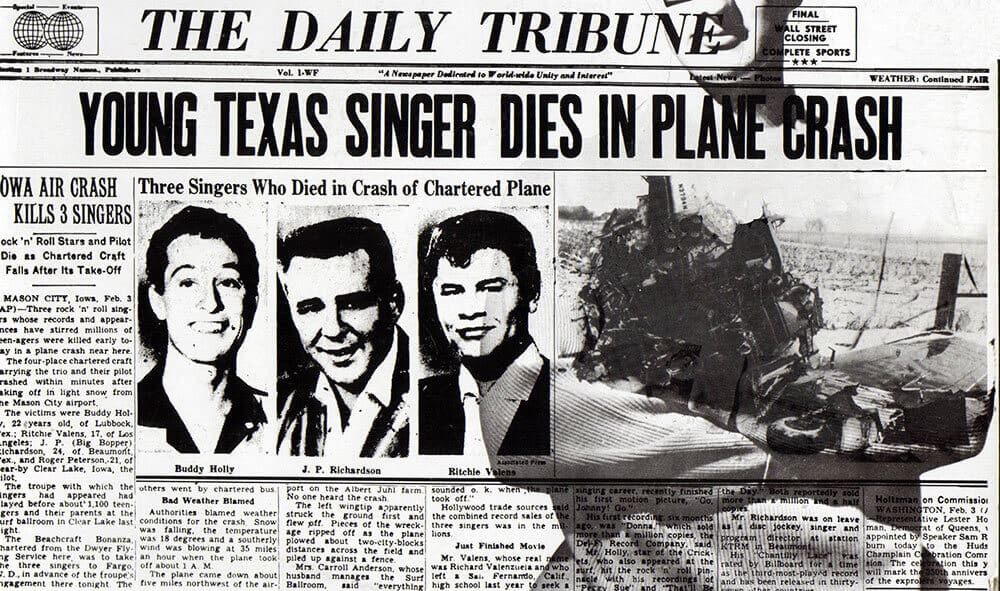 Taking off in bad weather with a pilot not certified to do so, the plane crashed, killing everyone aboard. The toll was incalculable: The singers of “Peggy Sue” and “Come On Let’s Go” and “Donna” and “La Bamba” were dead. Holly was just 22; incredibly, Valens was just 17. Rock and roll would never be the same. — Washington post

The song ends with the catastrophic concert at Altamont Motor Speedway.

“Bye Bye American Pie” is about the passing of an era in American life — an age of simplicity, innocence, hope, and optimism.

The “Chevy” was the most popular and desired American car of the era!

Connection with “Buddy Holly’s song — “That’ll Be the Day”

“joking in 1991 that the song “means I don’t ever have to work again if I don’t want to.” — people magazine

• Is the levee still dry
• the passing of an era
• lost hopes & dreams
• innocence
• optimism
• hoplessness
• the effects of a trajedy
• the day music died – really?
• optimism to despair
• making a social statement
• reflecting or changing culture?
• utopia lost
• moments which change our outlook
• meaninglessness
• lost meaning in a prosperous America
• prosperous yet lost hope
• prosperity can’t do it

A long, long time ago
I can still remember how that music used to make me smile
And I knew if I had my chance
That I could make those people dance
And maybe they’d be happy for a whileBut February made me shiver
With every paper I’d deliver
Bad news on the doorstep
I couldn’t take one more stepI can’t remember if I cried
When I read about his widowed bride
But something touched me deep inside
The day the music died

[Verse 1]
Did you write the book of love
And do you have faith in God above
If the Bible tells you so?
Now do you believe in rock and roll?
Can music save your mortal soul?
And can you teach me how to dance real slow?

Well, I know that you’re in love with him
‘Cause I saw you dancin’ in the gym
You both kicked off your shoes
Man, I dig those rhythm and blues

Oh, and while the king was looking down
The jester stole his thorny crown
The courtroom was adjourned
No verdict was returned

Now the halftime air was sweet perfume
While the sergeants played a marching tune
We all got up to dance
Oh, but we never got the chance

‘Cause the players tried to take the field
The marching band refused to yield
Do you recall what was revealed
The day the music died?

[Verse 4]
Oh, and there we were all in one place
A generation lost in space
With no time left to start again
So come on, Jack be nimble, Jack be quick
Jack Flash sat on a candlestick
‘Cause fire is the devil’s only friend

Oh, and as I watched him on the stage
My hands were clenched in fists of rage
No angel born in Hell
Could break that Satan’s spell

And in the streets, the children screamed
The lovers cried and the poets dreamed
But not a word was spoken
The church bells all were broken

And the three men I admire most
The Father, Son and the Holy Ghost
They caught the last train for the coast
The day the music died

[Chorus]
They were singin’ bye-bye, Miss American Pie
Drove my Chevy to the levee, but the levee was dry
Them good old boys were drinkin’ whiskey in Rye
And singin’ “This’ll be the day that I die”