Our Example: As you are walking through an airport — you probably will see one of those horizontal escalators.  Now they are called that by some people because of the similarity of look to actual moving stairs / escalators.

Nevertheless, we have laid out our first step as gathering some general and diverse information of the analogical item.

b) more researched-informative, as you read about it to gather new and/or more information

With this analogy, most preachers-speakers have both observed and rode on one at an airport — and so has the audience  — which makes drawing them into the analogy easier and more effective.

There are some “key elements,” which you may well want to include because it pulls the listener into the analogy.  They are thinking (if you connect with the elements they are familiar with), “Yea — isn’t that the truth.”  I will illustrate the use of those elements as we go.*

So — Step #1) Begin With General Information:  In this case, information beyond what I know, have observed and/or experience.

These “escalator sidewalks”  are called by different names . . . .

It is ordinarily a slow moving walkway that moves people horizontally over a distance of ground.   Although some have been made to move people much faster.

Presently, its most common use is in airports.

The purpose of such moving walkways is also . . . .

√  to move people past a display so as to follow the sequencing of the exhibit — (Tower of London, moving sidewalks are used to move visitors past the display of the Crown Jewels.)

√  to relieve the fatigue of walking considerable distances — (i.e., moving passengers with luggage between airport gates)

√  to move people in heavily populated cities — (i.e., A number of the crowded streets-sidewalks in Hong Kong are moving walkways)

√  to create a theatrical effect — (i.e., used in “The Phantom at the Opera” to give the effect that an individual is gliding across the floor)

√  to move people short distances in various kinds of repetitive activities — (i.e., used to move skiers up a mild, snow covered, incline to try it all over again).

First patented by Albert Speer in 1871.

First publicly introduced in 1893 at the World’s Columbian Exposition which was held in Chicago — with both sit or stand accommodations. 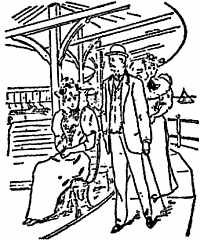 The first one used at the Columbian Exposition was made of wood planks.  It only lasted a year since it was destroyed by a fire the following year.

Today, most of the units in America are produced by the Otis Elevator Company — patented by them in 1955.

There is an entire area of social science which deals with “moving people and crowds.” The science of keeping lines moving is known as “queuing.”

Its popularity increased as the number of airport gates increased and passengers had to walk with luggage in hand greater and greater distances.

They typically move people about 2 mph — the speed at which a person typically walks.

It takes a little agility and care when getting on and off them.

Usually, at airports, two units are installed to move people both directions.

The walker has the option of either not walking at all, or walking as he/she is being moved (now you are moving at 4 mph).

” Please stay to the right if you’re standing on the moving walkway.
Move to the left if you’re walking!”

Step #2) Begin Your Illustration With The Secular Information:  Let’s try some different entries into our analogical illustration.

Now you have to be thinking ahead as to what you want to pull into your illustration, spiritual analogy.  The elements should show up at this beginning point first.  I will take some of the above material and work it three different ways, and then on “Step #3” — pull it down three different ways — respectively.

Have you seen — probably rode on — those moving sidewalks?

Many people call them “escalators”  — “Let’s get on the ‘escaltor.'”

Probably called that because they are made to look like what are actually “escalators” — traveling stairs.

But most people don’t know how to exactly refer to them and so they go by a number of different names — “moving sidewalk” or “moving walkway” — I don’t believe anyone has a right or wrong answer — someone has coined the term — “horizoncalators.”

They are used for different purposes — sometimes they are used because of distance — like in the airport — to carry luggage between gates can be exhausting.

At other times, these “horizoncalators” move people along a set path, in sequence, as they move past the exhibit.  It is designed to keep you on track as you watch.

The exhibitor or business wants us to see all that is being shown – displayed – exhibited — and to do that he knows that if he can put us on a walkway which is moving at a speed which allows you to see it for a right amount of time — he has a greater chance of having you learn, understand, or buy it.

There are times when moving people, or moving people fast, is important to the smooth — at least smoother — operation of the business.

That is the case with those moving sidewalk ways in the airport.  It is not just so you have it easier, but also because that allows the airport to sprawl over more ground with gates that are sometimes miles apart — been there?

If airports are going to get bigger — they need to make sure they do not wear out the travelers by having them hike such long distances between gates.

Having passengers not make it to the next gate on time is not only frustrating to the traveller but impacts their business.

You can walk, and they will also help get you to your final destination.

“People Moving” — it is a science in and of itself.  It is called “queue.”  How do you move people efficiently  — most times it about moving people through long lines.

Getting and keeping people moving is one of the reasons you see those “walking sidewalks” at airports.  While it is not the only reason, it is one reason — else people stop on the concourse looking at this and that, holding up and redirecting people around this and that — you know what I am talking about – huh — excuse me!

On these horizontal escalators, you can either let the walk carry you along, or you can walk while it carries you along.  When you have a lot of baggage and the weight is a lot — or you are just tired — it is nice to just have it carry you fully along for a short while.

•  what truth, principles, or point you are going to make

•  what information you believe will catch and keep their interest (not all we have included above will be useful for this-or-that point.  It may help with a different point.

•  what concepts and/or words do I want to use for the other side of the analogy.

Step #3) Pull Over The Analogy:

At times, the Lord and the  Spirit of God want to move us a certain direction and keep us moving through a real-life situation on display — in our lives or in the lives of another.  To do that God puts us on that moveable sidewalk which brings us through and by that event in life — so that we stay in sequence — from the beginning to the finish.

If you are one of those who both walk and ride  — who is moving you down that concourse?   Well, the moving sidewalk is AND you yourself are also moving — that is how the Holy Spirit works.

Elijah, where did you get the strength to continue?  Well — get up and eat lunch and then have dinner — “walk” — and then the Spirit will also empower you to keep moving.

The Lord wants us to walk, but to walk with greater ease and accomplish more by His Spirit.

You know that one of the reasons that the Spirit of God indwells us as believers — oh it is not the only reason — but it is one of the reasons — it is when the weight, the burden, the luggage gets too much — or we are tired — worn and weary — He is there to get us to the next gate.

I could even use the “Please, step to the right” part  — which easily identifies with an audience.  It could be developed in relationship to evangelism, unity, or ministry.

There will be those who aren’t walking, and they are stopping those who want to move and minister.  Don’t let those who are just on for the ride, stop your zeal.  The Great Apostle Paul was always walking left.  “Walk left” in ministry.

That phrase “Walk Left” could be infused with meaning with the secular part of the analogy — and then used as one preached about someone like the Apostle Paul, evangelism, and/or in passages of the book of Acts (John Marc & Paul).

“Looking to the future,  Thyssenkrupp, has developed a high speed and high capacity moving walkway – called ACCEL – that uses maglev technology. The model has a belt that begins at normal walking speeds and then accelerates up to 7.5 mph at its top speed.

“As you come to the other end of the moving walkway, the belt decelerates back to the standard moving walkway speed and you step off just as you would on a regular moving walkway,” said Patrick Bass, CEO of Thyssenkrupp North America.” — movingwalkwayshistory

The Physics Of A Crowd

One thought on “Today’s Illustration: Step To The Right or “Walk Left””